Say what you will about them but love them or hate them, KISS rolled into Nashville on October 28th and showed everyone they they still know how to put on a killer stage show. While I wasn’t as excited to see them this time as I have been on past tours, they caught me completely off guard and I think this was their best show since I saw them on the Revenge tour in Denver back in 1992.

I am accustomed to Gene forgetting the words to at least one or two songs at any given show but this time around, he was on fire. The only mistake I noticed from him was one obviously sour note during Shout It Out Loud. Color me impressed. I read reports that Paul was having vocal issues early on in the tour but by the time this show rolled around, those issues were a thing of the past. Tommy Thayer gave the crowd a little surprise by singing Shock Me. At first, the Ace fans were cringing but Tommy nailed the performance and I think he did it justice. During the solo, it appeared that he was trying to do the “rockets into the lighting” bit but something malfunctioned and the rocket didn’t shoot. Eric Singer sang Black Diamond, which isn’t anything new, he’s been doing it since the Revenge days. The only thing that struck me as odd with Eric was that it looked like he was reading a teleprompter during the chorus of Say Yeah. I’ve never seen Eric rely on a crutch so that was weird. They only played two tracks from their new album Sonic Boom. Modern Day Delilah & Say Yeah. I dig MDD, SY, not so much. 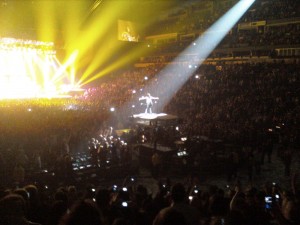 All in all, the whole deal was well worth the price of admission. (For the record, my buddy John Hamilton bought my ticket on the condition that I drive.) After having seen them almost completely fill Sommet Center, I don’t see them slowing down any time soon. If you get the chance to catch them on this tour you ought to go see them.