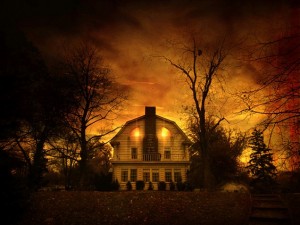 Whether this was one of the greatest hoax’s pulled off  or one heck of a real haunting…The movie scared the hell out of me …I saw it on Cable TV a few weeks ago and I still couldn’t watch it…creepy, very creepy..

AMITYVILLE, N.Y. – The house made famous in the 1979 film “The Amityville Horror” is up for sale in New York — ghosts not included.

The five-bedroom Dutch Colonial went on the market Monday for $1.15 million.

The Oscar-nominated film is based on the story of the Lutz family’s brief stay in the house in 1975 after six members of the DeFeo family were shot and killed as they slept in the home. Eldest son Ronald DeFeo Jr. was convicted of the murders.

The crime spawned a book and a series of movies that chronicled various supernatural horrors, including visions of walls oozing slime, moving furniture and a visit from a demonic pig named Jodie. The original film stars James Brolin and Margot Kidder.