Hollywood reshooting “True Grit”…:( Aren’t some things sacred? We need to clone John Wayne so he can come back and kick their ass…

I guess next they’ll want to reshoot Pink Floyd’s “The Wall” with Adam Lambert as Pink??? I made that up but jessh people, leave some of the classics alone…ok? They might as well let Stephen Hawking try and repaint the Mona Lisa ..(chuck)

Here’s an exceprt from the article…. 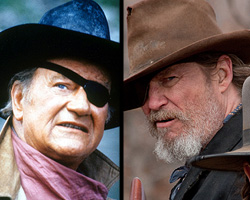 1969, John Wayne played Rooster Cogburn in “True Grit” — a grizzled, drunken U.S. Marshal hired by a 14-year-old girl to track down her father’s killer. The role ended up winning the aging Western star his first and only Oscar, prompting him to make a rare sequel — “Rooster Cogburn” — opposite Katherine Hepburn in 1975. The image of Wayne’s craggy, eye-patched visage from “True Grit” has become a cinematic icon.

So film mavens everywhere were taken aback when it was announced last year that Joel and Ethan Coen would been making their own version of “True Grit.” But don’t expect a straight remake; this movie is based more closely on the Charles Portis novel. And Jeff Bridges, fresh off his Oscar win, was tapped to play Cogburn; that’s right, the Duke has been replaced by the Dude.