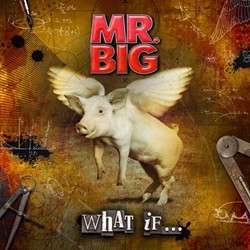 Frontiers Records is proud to announce the highly anticipated European release of MR. BIG’s new studio album entitled ‘What If…’ on January 21st 2011. The North American release, also on Frontiers records, shall follow in February with more exciting details to be announced!

‘What If…’ is MR. BIG’s first “all original” album since the reunion of the four original members, Eric Martin, Paul Gilbert, Billy Sheehan and Pat Torpey back in early 2009. Sixteen years after the release of ‘Hey Man’, the new recording is set to bring back MR. BIG on the height of the current Hard Rock scene.

Guitarist Paul Gilbert said, “This is the first MR. BIG album I have been a part of since fourteen years, and it was done in a snap. It was fun and we had really a good time in making this one”. Continues Billy Sheehan, “It’s so great to be back with Paul, Eric and Pat too. We wrote this record like we did in the old days for the first 2 records. Jamming together in the same room to write songs”. Pat Torpey adds, “Some of the recording process is different now from what we were used to in the old times. But I think this record really managed to capture the performances of the band, not of the individual musicians”.

Eric Martin concludes, “I like to compare this to the first album, when we just got to know each other in a reharsal studio and cut it in 8 or 9 days. This is like chapter 2. We had so many years, so many records and so many things behind us. Now this feels like a beautiful brand new chapter starting for all of us”.

‘What If…’ was produced by Kevin Shirley (Aerosmith, Rush, Iron Maiden) and the release will be followed by a World Tour which will kick off in South America in March and will hit Europe in early summer.

Their hits included “To Be With You” (Billboard Hot 100 number one single in 15 countries for weeks in 1991, propelling the band the band to huge international success and record sales in the multi-millions), “Wild World”, Green-Tinted sixties Mind”, “Just Take My Heart”, and a host of heavy metal songs that were played mostly during their live performances: “Daddy, Brother, Lover, Little Boy”, “Addicted to that Rush”, “Colorado Bulldog”, and “Take Cover”.

‘What If…’ will be released in a special edition CD + DVD in digipak, regular CD, vinyl and digital download and in a limited edition luxury box including the CD, DVD, LP and exclusive memorabilia.

‘What If…’ tracklisting includes: Undertow; American Beauty; Stranger In My Life; Nobody Takes the Blame; Still Ain’t Enough for Me; Once Upon a Time; As Far As I Can See; All The Way Up; I Won’t Get In My Way; Around The World; I Get The Feeling; Unforgiven (exclusive bonus track for Europe / North America – not on vinyl edition).

The DVD will include the videoclips of “Undertow” and “All the Way Up” plus a documentary “Making of” the album including interviews and exclusive behind the scenes features of the four members.

The first single “Undertow” will have an official promotional launch on November 27th.