That’s pretty young to be having this done.Wonder if his 26 year old wife wore out his heart?..(chuck)

“Let me catch you all up on the past couple of weeks’ happenings, because it affects many things.

“On Monday the 29th of November, King had to be transported to the nearby hospital by ambulance. After several different tests were done and the EKG machine showing abnormalities, the doctors recommended that he get a cardiac catheterization.

“Cardiac catheterization is a procedure where the doctors lead a very thin tube up from the leg and into the heart, where it injects dye into the bloodstream. Then a camera at the end of the tube takes many pictures of the heart’s arteries, looking for blockages.

“After this was done, they determined that King had several heart attacks, and three of his heart’s arteries were the cause: one was completely blocked, the second was 90% blocked, and the third was 65% blocked. The only solution to this was an open-heart triple-bypass surgery.

“If you are interested in the details of how this surgery is performed, please look it up online. I will only touch on the basics. The sternum (breastbone) is cut in half and pulled apart, to expose the heart. Veins are harvested from other places of the body, in King’s case it was his left leg and chest wall. The person is then hooked up to a machine that practically does the job of the heart, circulating and oxygenating the blood. The heart is then stopped, and the lungs collapse (the lungs stop working since the blood is being oxygenated by the machine). The surgeon then sews the harvested veins in place, bypassing the found blockages. Once the surgery is done, the surgeon moves the ribs and breastbone back into place and wires it together. The chest is closed as well. They use an electric pulse to start the heart and a breathing machine is lead into the lungs to restart breathing.

“King’s surgery took approximately seven hours. Everything went well, and King was taken to ICU for recovery. He was walking and eating solid food already two days after the operation, and he was the first one in the history of the hospital who walked on his own power from the ICU to normal care.

“10 days after the ambulance took him to the emergency room, he is at home and is recovering well. It will be a few months before he feels completely normal and is without pain.

“He would like to mention here that he’s eternally grateful for the wonderful staff at Centennial Medical Center who took care of him. Dr. Kourlis, Dr. Kamili, Dr. Alang, Nurse Christie and Nurse Thomas among many others made sure that he got the best care and attention he could ever have hoped for. They were always very nice to me, too, letting me stay overnight in the ICU after visiting hours were over.

“In light of this, he will be taking a break from music and the music business altogether until further notice. He very much wants to write new music, finish the DVDs, and go on tour, but for now, all those things are in the distant future and he’s not thinking about them.

“Please understand that the KING DIAMOND band is not stopping, disbanding or anything of the sort. King’s health is first priority, and when everything is going good with him, the music will resume.

“Thank you all very much for reading this and STAY HEAVY.”

A video update from King Diamond — which was filmed by Germany’s Rock Hard magazine on September 27, 2010 in King’s homebase of Frisco, Texas — can be viewed below.

KING DIAMOND’s video for the song “Give Me Your Soul” can be viewed below. The band’s first clip in 17 years was shot in September 2007 with director Bill Schacht from video company Aestheticom, which has previously worked with DIO, ALICE COOPER and DREAM THEATER, among other artists. Speaking to MTV.com, the group’s frontman/namesake — who was suffering from a herniated disc at the time — said about the video shoot, “They limited what I had to do, of course, so I only did one day of shooting for 90 minutes, but just standing there moving a little bit in the full outfit was very difficult. And afterwards, I got one of those sharp attacks of pain that I hadn’t had in a month and a half. The only thing I can compare it to is a really super-bad toothache or earache. And afterwards, I was like, ‘OK, I’m not ready [to tour] yet.’ ”

KING DIAMOND received a Grammy nomination in the “Best Metal Performance” category for the track “Never Ending Hill” off the group’s latest album, “Give Me Your Soul … Please”.

“Give Me Your Soul … Please” entered the Swedish national chart at position No. 28. The CD also landed at No. 58 on the Danish chart (the second highest new entry on the chart behind VELVET REVOLVER).

“Give Me Your Soul … Please” sold 4,500 copies in the United States in its first week of release to debut at position No. 174 on The Billboard 200 chart. 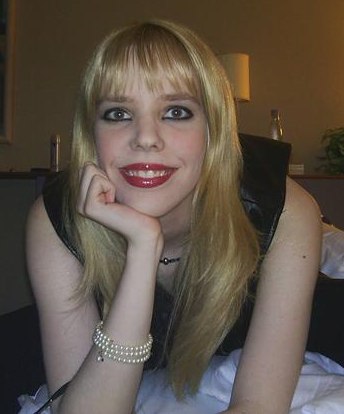