So everybody and their Momma in one way or the other is talking about the “anniversary” of September 11, 2001. It’s all over every news outlet and Facebook / tweeter post out there in cyber space too. I sometimes wonder if the news people talk about it just to sale ads and make money instead of really doing something that is meaningful about it. Sort of like the 80’s song “Dirty Laundry” by Don Henley that goes in part like this…

“I make my living off the Evening News
Just give me something-something I can use
People love it when you lose,
They love dirty laundry

Can we film the operation?
Is the head dead yet?
You know, the boys in the newsroom got a
running bet
Get the widow on the set!
We need dirty laundry .

But remember, Ten years ago it was different. We all were one. It wasn’t about making money on a tragedy. We were under attack and we stood together as one. 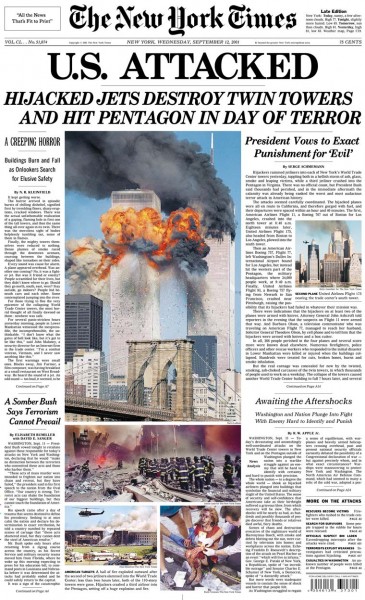 As far as an “anniversary” its more of a remembrance to me. It’s one of those etched moments in history that is in everyone’s mind that was alive at the time it happened that they will never forget where they were at when it happened. I was at work and a co worker and I watched it unfold on a four inch black and white TV that we had stashed in a locker. For more examples, when I was younger and lived at home still, my neighbor across the street who was an old man at the time was in the Military during World War II. He too had one of those etched moments in History. He told us boys that he was “banging” ( I am changing his word that he used that started with an “F”) a Philippine whore when he heard that America dropped the first Atomic bomb on Japan. He wasn’t making fun of it, He was just being honest… He remembered where he was at.

I was working at G&G Generator when the space shuttle Challenger exploded during its lift off back on January 28th, 1986. Our Secretary Mary came running out of the office and was hysterical saying “It went up and just blew up”! We went into the office and watched it on TV in shock like the rest of the Country at the time. I won’t ever forget that day.

If we go back a little further I was in Mr. Jacob”s Social Studies  class watching President Reagan leave that building when he got shot. I never will forget that either.

I am sure some of the older folks remember President Kennedy’s assassination. It was before my time but for those that were alive they will never forget it either.

So where am I going with this? First off, this is my opinion and I am not making one damn dollar on it. I don’t want to. The key to this event is to “Never Forget”. Never forget what the terrorists did to all those innocent people. Never forget what they did to the rest of the Country. Don’t harbor hatred but don’t forget what they did and will do again if given the opportunity. So what do we do? Well it’s been ten years and so far so good as far as being attacked again. However, that day changed the World for everyone. It put a spotlight on all of our weak spots in national security but it also put a spotlight on the roaches of the world. The Terrorists that used to hide in the shadows and jump out every once in a while to bloody our nose now have fewer places to hide since out previous President vowed to “get the people that knocked these buildings down”. Remember that speech Mr. Bush gave? He had the right idea. Kill the roaches while they are still in their nest and not nesting in our backyard.

We don’t need to cater to these people. I don’t think they need to treated as human beings. If you wish to be a terrorist, fine, be one but expect to die for being one and not locked up for years and years with 3 hots and a cot. If these people are stupid enough to believe that if they are martyred they will be  received in paradise and have 72 virgins, I say lets arrange the meeting for them.

Let’s don’t forget and let’s not put our guard down either. I am reminded of a different time. Back when nations’ where tough as hell and our Leaders’ didn’t take any crap off of anyone. Though Winston Churchill’s speech was about the invading German army into Europe we could use it for today and quit letting our Leaders go soft on these roaches…

We don’t have to carry hatred in our heart but we cannot turn the other cheek on this one. Those people don’t think like that. You try to make friends and they will kill you. Don’t think so? Right after Iraq was freed of their tyrant Leader a young American named Nicholas  Burg went over to help rebuild. He was there to install satellite dishes for the citizens and what happened? He ended up in an orange jumpsuit being video taped as his head was being cut off his shoulders for the whole world to see. He was there to help and was slaughtered like a rabbit. He was just one of many that was treated that way. They also left this quote for us all

“You will not receive anything from us but coffins after coffins … slaughtered in this way.”

Those are the same group of  people that also flew those planes into the buildings on September 11, 2001. ..So what do I say about terrorists?