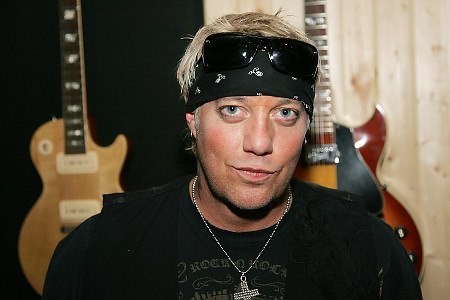 According to TMZ.com, officials have determined that former WARRANT singer Jani Lane died from alcohol poisoning.

The Los Angeles County coroner’s office has completed its investigation and concluded Lane had suffered from “acute ethanol poisoning” when he died at a Comfort Inn motel room in Woodland Hills, California on August 11.

TMZ.com previously reported that investigators found a half-empty bottle of vodka and prescription medication in the hotel room where Lane‘s body was discovered.

“He was one of the great rock-and-roll frontmen and singers of all time,” Jani‘s manager and longtime friend Obi Steinman said. “His music helped shape the ’80s.”

Lane had battled alcoholism for years and also had a history of alcohol-related arrests. The singer’s sister, Vicky Oswald-Ley, told RadarOnline.com that the death of their mother seven years ago affected Lane‘s battles against alcohol. “She would always talk him into going into rehab and hospitals,” she said. “I think when she passed, that desire to stay healthy died too.”

“He finally succumbed to that,” Steinman said. “He lost his battle over alcohol.”

Lane released a solo album, “Back Down to One”, in 2003, but shortly after was admitted to a rehab center for alcohol and drug-related exhaustion. He also appeared on VH1‘s reality series “Celebrity Fit Club”.

On July 19, 2010, Lane pled no contest to DUI stemming from his arrest two months earlier — and was ordered to serve 120 days in jail. In addition, Lane lost his license for three years and had to complete a 30-month alcohol-education program.

Prior to serving time in jail for his most recent legal troubles, Lane issued a statement in which he said, in part, “My true hope is that anyone out there dealing with personal problems… the consequences do not get lighter. I can only say I’ve never regretted a good decision or action and never been proud of bad ones. People have an astounding ability to forgive… I have to start with forgiving myself. That is something that I find far more difficult than I imagined. I think it starts with gratitude.”

In a June 2010 interview, Lane spoke about his battle with alcoholism and the negative impact it has had on his career.

When asked if his treatment involved going to a rehab, Lane replied, “I have gone to rehabilitation, absolutely. I know some people who want to be quiet about that kind of stuff, but I am not the kind of person who pride is going to win out over saying, ‘Hey, I’m honestly getting this in check and fixing this.’ It is a very important thing to me. I mean, this just doesn’t affect me like it used to. It affects everything in my life, including the people I love. To be honest, I get tired of giving ammo to the people who don’t wish me well.”