Special thanks goes out to Amanda Blide for sending us the interview! 🙂

1.    Welcome to Kick Acts. Tell us a little about yourself and your band and were you can be found at on the web. 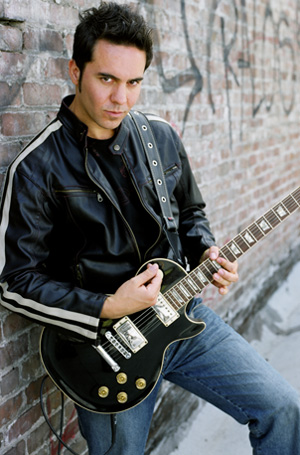 Hi, my name is Darius Lux, I perform solo or with my band, sometimes 3 or 4 other players. I can mainly be found at www.DariusLux.com and we have a bunch of videos up at YouTube.com/DariusLux. There’s also a FB page called Darius Lux Official. That’s about everywhere that I hang out on the web regularly.

Phew! That’s a big question and it kinda keeps on changing. As a child I was impressed by Prince’s prolific song-writing and virtuosic talent. Led Zeppelin and Jimi Hendrix are also influences, but kinda in a haze of mystery and legend that is inspiring, tho it may be a little skewed thru time. I loved blasting the Red Hot Chili Peppers and Pearl Jam in High School, they seemed very accessible and committed to their music and it’s message. More recently, I have been blown away by Muse – the level of honesty in the writing and the sheer artistry of their live show. MUTEMATH are another great band that continue to inspire me with their creativity, they’re great live too.

3.    Do you have any advice for someone just getting started in playing music?

Any pitfalls they should avoid? Yes, start playing an instrument as young as possible! And commit to it – practice every day, if only for 10 minutes, it will make a difference down the line. Pitfall would mainly be expecting anybody else to make it happen for you – it’s up to you to drive it.

Errr, I don’t think I do – is that sad or what? Maybe I am yet to play my greatest gig, or a gig where something great happensLOL

5.    On the same token as the above question. How about a “worse gig” ever story.

Haha, that’s a little easier – how about every other gig I have played in Hollywood, a town that is rich in legacy and short on anything real these days…I’d love to play at a venue that doesn’t have a crack head as a sound guy.

6.    Do you have any other hobbies other than playing music? Collect stamps? Collect hats from off the side of the road? Draw pictures of boobs?

I think I could probably develop a hobby of drawing boobs pretty quickly;) Erm, I have to admit that running my own indie artist career is pretty overwhelming and doesn’t leave much time, but I guess gardening is a hobby, it is peaceful and nice to see the fruits of your labor grow thru the season. Oh, I collect hats too, for a while I was getting a new hat for each gig  I played until I realized the hats were costing more than the money from the door.

7.    What do you think about the present music scene or lack of here in the Evansville area? Care to address that?

I haven’t been to Evansville before, but as mentioned earlier, Hollywood isn’t much better. I wonder where the good bands are a lot of the time, maybe they’re all online, podcasting from their basement and tweeting new fans…

8.    Tell us something about each of your band members that we wouldn’t expect to hear… Like their hobbies or something like that.

My keyboard player is actually a big celebrity in Hungary where he is in his 2nd season mentoring for X-Factor. My bass player is a set extra for shows like CSI Miami etc, he’s on there quite a lot as some dude running or being chased etc Oh wait a minute – those aren’t hobbies are they? – well I figure that’s more interesting 😉

9.    Hypothetical situation. You’re stranded on Gilligan’s island and you get to hook up with only one of the girls. Is it Ginger, Mary Ann or Mrs. Howell and why?

Ginger definitely got it goin on, but I say Mary Ann cos she’s cute, smart and has a lot of heart.

Okey Dokey, I just gotta say that I am getting so bored of all the electrified-synthesizd-cookie-cutter pop music of today, it all sounds the same and has so little heart and soul in it – it is mostly driven by a lot of cold, corporate ideologies, I know cos I have sat in on the board meetings. I pray that I am able to break through in some way and offer people something of integrity, quality and value.