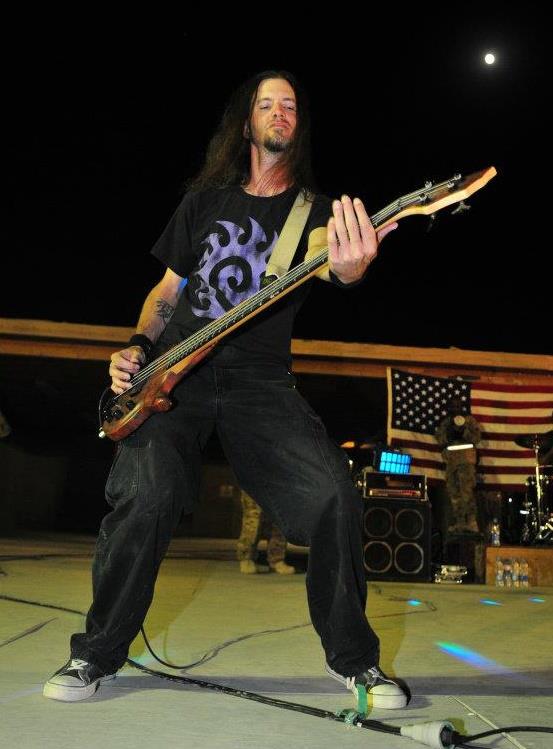 1. Welcome to Kick Acts. Tell us a little about yourself and your band and were you can be found at on the web. My name is Bret Mitchem. I am a starving artist, musician and writer. I have no qualifications for any of these but I never let that deter me. I have been playing in bands for many, many moons. Including Ugly Babies, Space Cake, Forkskin, menSana, 2G,  Gorilla Monsoon, 138, Calling Corners, and Goldy lockS.

2. Who are your musical heroes, influences & why? As a child, KISS was pretty much my whole life. They planted the seed of wanting to be onstage and rock out for people. As a teen, the Red Hot Chili Peppers and specifically Flea inspired me to a new level bass assault. A few years later I discovered GWAR, who continually inspire me to be creative and to carve a path of originality.

3. Do you have any advice for someone just getting started in playing music? Any pitfalls they should avoid? Playing music is probably the most pure joy I have found in life. It is a complete cathartic and creative release for me. If you feel it in your soul like I do, then by all means live your dream! But making a living at this is an extremely difficult task to pull off. It takes much more than talent or good looks. It takes endless devotion, sacrifice and a whole lot of luck to be successful. But I truly believe that anyone that sets their mind to a task can and will eventually accomplish their goals.

4. Do you have a greatest gig story you’d like to share? Well, I have more than a few great gig stories. A few would include playing at Mesker Amphitheater, Jimi Hendrix once played on that stage. Also getting to play onstage at the Gathering of the Juggalos with Rev. Fang Gory was a great experience. But most recently I would say playing for the troops in Kandahar, Afghanistan on the 10th anniversary of 9-11 was an unbelievable experience. We caught a Taliban rocket attack midway through the show. It was during band intermission when world class comedian Andy Hendrickson was onstage performing. The warning sirens went off and the crowd of 3,000 plus all simultaneously hit the dirt. Thankfully no one was hurt and after about 45 mins of taking pics and signing autographs in the bunker with folks, we got the all clear. Someone asked me if I was scared to go back up onstage? I replied I was scared that they would not let us. Luckily they did and we did. We got back up and finished the show, even though the huge crowd had greatly diminished by then.

5. On the same token as the above question. How about a “worse gig” ever story. Well, everyone has had their share of “not so great” gigs I’m sure. The kind where anything that can go wrong, does. It is a horrible feeling to be up there, in the zone, only to have your gear cease working for no reason. But shit happens. You just have to know how to roll with it.  Also getting drunk before getting onstage is never a good plan, lol.

6. Do you have any other hobbies other than playing music? Collect stamps? Collect hats from off the side of the road? Draw pictures of boobs? I love creativity! I enjoy drawing, designing, painting, printing, writing and doing just about anything that involves being creative. I am also an avid video gamer. I regularly kick ass in the name of the Horde in World Of Warcraft. And still play the occasional game of Worms.

7. What do you think about the present music scene or lack of? Care to address that? I almost always reject present day popular music for no reason other than I hate having anything forced on me. But I have found that if you dig deep enough, you can find truly great music being made at any given time. Especially on the local level. Currently I find myself listening to more and more rap. I can’t get enough Tech N9ne. And as far a current band, I really like Silversun Pickups. I enjoy their albums more and more each time I listen to them.

8. Tell us something about each of your band members that we would not expect to hear… Like their hobbies or something like that… After a very busy year of touring, traveling and adventuring, I am currently taking a few months off to reset. So I am in between projects at the moment. However I would like to take this opportunity to give a shout out to some of my past band brothers and mention their current bands. Everyone should check these guys out: Sideshow Romance, Tenn Pound Hammer, Honey Roy, Old Union, Hen Tooth, Wedge, Gorgantherron. Also shout out to Aegaeon who are about to go on tour again. Oh and Austin Leslie, you beautiful bastard. Wherever you are…

9. Hypothetical situation. You’re stranded on Gilligan’s island and you get to hook up with only one of the girls… Is it Ginger, Mary Ann or Mrs. Howell and why? Ummm, Mary Ann. She was the brunette right? Also while on the island I would await the day that the Harlem Globetrotters arrive so we can get a pickup game going. Curly rules!

10. #10 is called “Shout It Out Loud”. It’s were you get to talk about whatever you want to talk about. So go ahead and “SHOUT IT OUT LOUD”! Ahhh, this question is pretty much the sole reason that I dropped my cherished veil of privacy. I wanted to bring attention to our troops that serve every day across the globe. Regardless of your opinion of the war, we need to support our brothers and sisters who spend years working and living in very difficult environments. At this time of year when familes all come together to enjoy the holidays, so many people have to spend it on the other side of the world, far away from their loved ones. I met so many awesome people on my tour overseas. And I found that a lot of them joined the service for no other than the are no other jobs available in their area. Whole squads of troops would be from the same town. And words just can’t do justice to what they go through and live with everyday. I’m not even going to mention the Poo Pond at KAF, lol. I was very happy to work with the Armed Forces Entertainment and the USO. It was truly an eye opening experience. We should all give thanks to these amazing people. And if you like like to help out in some small way, I encourage you cantact the USO. I know they have some great stuff going on right now. Like the Wishbook and the 10 Million Minutes program. Please check it out.

Without looking up it on the internet, do you know who “Rita Repulsa” and Lord Zedd” are and how do you know? I do not. Sorry.

Should singers and bands also be political too or just make music and keep  their opinions to themselves and not go “Bono” on everyone? I think it is a very fine line for artists to express their particular views on politics. On the one hand, most people listen to music for a care free release, and do not want to have someones views dumped in their laps. But on the other hand, artists and musicians are people and have just as much right as anyone else to share their opinions. I think it can be accomplished in a tasteful way. bands like System Of A Down and Rage Against The Machine have made a career of it and remain relevant to this very day. Another great band is MUSE. They have done a terrific job of not only being a top notch rock band, but have opened many minds to various topics the world over.

At what point should someone that hasn’t made it give up on their dream and get over it or should they ever give up? As I said above, If you are doing something that you truly love to do, then that is all that really matters. If you are only in it for superficial reasons: Money, girls, fame, etc… then your path will not only be difficult, but ultimately fruitless. With that said, if you have a dream, NEVER GIVE UP! Fight for it, live for it, die for it!