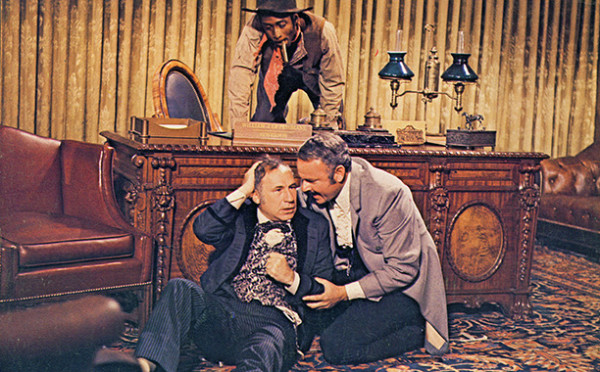 Quite possibly one, if not the funniest offensive movies of all time! (Well, unless it’s cut up and edited for normal TV then it’s the worst edited and cut up movie of all time…It never gets old! If you are offended…So be it…Mel Brooks is a comedic genius! The famous Richard Pryor helped write the scrip and oversaw the use of the “N” word too! You can’t beat a good fart/radical racial/ white bread/black country cowboy/ and  gay fight movie all rolled up into one! We gotta build that railroad!

The SHERIFF IS  “NEAR”

from EW’s interview with Mel Brooks Richard Pryor helped write the script, and you wanted him to play the sheriff, Bart. What did he bring to the film? I was so lucky to get him, because he’s just funny in every way. He made a profound contribution to that script. He gave me some really beautiful 126th Street, St. Nicholas Ave. [Harlem] lines. I quit for three days because Warner Bros. wouldn’t [let me cast] Richard as Black Bart. Richard came over and said, “If I was the black sheriff, I could pass for Cuban because I’m coffee-colored. Now, this guy Cleavon Little: He’s classy, he has poise, and he’s really charming. But he’s black as coal. He will scare the s - - - out of them.” I said, “Okay, I’m coming back.”

For more of the interview with Mel Brooks from EW, go here: