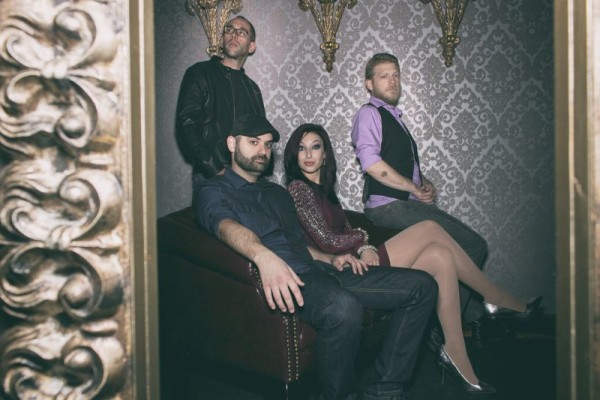 I think that everything I’ve ever listened to has influenced me in some way. There are bands that I love talking about because I love listening to them and I love what their bands represent. Circa Survive never disappoints, their new record is incredible. I love that Manchester Orchestra has been putting out really interesting rock records and never do the same thing twice. There are so many others that I take little things from.

A musical hero would have to be Billy Corgan. I remember listening to old Smashing Pumpkins records when I was growing up and loving the diversity of them, the guitar tones, the lyrics, just everything. I know some guitarists worship these prolific players from the start, but I don’t think I ever really admired a guitarist until I heard his stuff. It always surprised and intrigued me. Couldn’t get enough. Johnny Greenwood is like that for me as well. Just give me something I haven’t heard before.

Here’s where I could be funny and tell them to be an accountant instead or something… But the truth of it, like most careers I think, is that this life sort of chooses you. Lots of people opt out after a few years. You really have to love it enough to put it all the time and effort. It’s not always easy and it’s not always fun. But a lot of the times it’s worth it anyway.

Well, just about every time you head out on the road or even to a local show, you have the chance for some kind of adventure. A few years back we’d thought we’d lost Amy on an island off of Rhode Island when she was sitting 5 feet from us around a corner and we proceeded to search for a few hours because we had no idea. We’ve been stranded in Goodland, Kansas for 4 days playing putt-putt golf non-stop while our van was being repaired and the shop kept ordering the wrong part. We’ve shown up to a gig in Nebraska and the opening band broke up that morning and refused to play, or a gig in Missouri where the soundman never showed and they wouldn’t let us run our own sound…

There have been lots of successes too, but I think the misses are a lot more fun to read about!!

I’ve been reading and collecting comic books since I was about 6 years old. That’s pretty awesome, I still enjoy it even though they keep getting more expensive. Oh, and I just bought a new PlayStation so I’m getting back into video games. It’s been my new obsession. Maybe this record won’t come out on time after all…[hmtad name=”Adsense Unit 1″ align=”floatright”]

Our local scene is amazing. Northern Colorado bands are some of the most talented and cooperative that I’ve ever experienced. We love traveling but we also love coming home. It’s all very supportive.

Overall on a national level, I’m not sure rock is getting the attention that it did 5-10 years ago. Folk has been dominating the alternative radio and now it’s moving a little more towards electronic. It’s fine, it all goes in cycles, but I wouldn’t mind a resurgence of interesting rock music personally.

Did they have an effect? Maybe on some. I don’t personally watch any of those shows; I have a really hard time with them. I don’t like that it gives the impression that a ‘big break’ is your only option for success. Post P, like a lot of independent bands we know, has more of a ‘Let’s collect a lot of little breaks’ mentality. So I guess if a large amount of people get discouraged from trying music because they’re sitting at home and don’t think they can compete on one of those shows, then yeah, I’d say that’s a negative effect.

Well, it seems like downloading is on the menu and there’s no way to stop it. Apple tried to legitimize downloads with iTunes and I guess that was the way to fight back for a bit. Now streaming is the ‘answer.’

I still buy music. Streaming isn’t really my thing, there are so many options I just get paralyzed and can’t think of what to listen to. For Post Paradise and where we are now? I’m excited any time a fan wants our music. I prefer that they buy a disc at a show because that’s the best way to support us. But if we were bigger and I found out that people were massively downloading our songs from illegal sites? That’s tough. I don’t think the people that are downloading illegally are necessarily your ‘fans.’ They’re fans of that song maybe. But if they like the band enough they would come to a show and buy some merch or get involved. You almost don’t need to worry about those other people that ‘steal’ your music. There’s not much you can do about it anyway and they probably don’t matter in your world in the long term.

None of us knew each other before this band. I found all of this band’s members online, Craigslist and such. I tell other bands that and they can’t believe it. You hear all the horror stories about that sort of thing. Somehow I just found really great and talented people. We’re all on a similar wavelength and have been getting along well and having a blast for the last 3 years.

Ah, the old Mary-Ann vs Ginger question, a classic… I probably haven’t seen that show in a decade, but I’m pretty sure when I still had TV, my answer would’ve been Mary-Ann. Yeah, definitely.

Ha! Yes, I own a decent amount of vinyl. I know that the popular opinion is that is sounds better and warmer, but I also enjoy it because it makes you work for it. I only buy vinyls of records that I enjoy from start to finish. This is because you have to get up every 3 or 6 songs to turn it over and go through that whole process. It’s not easy to just skip a song so you’re stuck with it. I love that about it. You have to know what you’re doing for the next 45 minutes before you sit down to listen. There’s some charm to that, you better be ready to appreciate the work and love that went into that entire ALBUM. And yeah, sure, maybe it sounds better, haha.

That’s a good question. I know that I probably have heard his stuff somewhere, but I couldn’t tell you what one of his songs sounds like. I just hear about how everyone hates him because he acts like a jerk or they want him deported back to Canada or whatever. The rest of the world must think we’re just one big reality TV show. And they might be right…

Ah… that’s a good question. I see Miley Cyrus as a lens through which to view the music business’s big media machine. You can learn so much about marketing and trends through the examples that she and her team set. Of course, it might be something you didn’t want to learn

Always real vocals. I don’t care what the circumstances are. I paid my money and… you know what? To be honest, I don’t think that the bands I go to see, mostly rock band and the like would do the lip-syncing thing so it’s kind of a non-issue. That seems like something that reserved for the big pop acts that are flying on wires over the arena and then jumping into their big dance number. They’re entertainers.

Sounds like Crystal Clear Pepsi is making a come back? I bet that’ll kill!

I am a huge fan of Circa Survive. Each one of us in the band probably has our own band/artist that we can’t live without, but for me personally, I can’t get enough of their music or live shows. Every record they put out pushes the limits of what you thought could be done with rock music. It’s so enjoyable to me to be following a band for such a long time and always be pleasantly rewarded release after release.

Ok, a musical secret. I really enjoy listening to Katy Perry AND Lana Del Rey. There, I said it. Phew, that’s so liberating!

Jaws. Has been for a long time and I don’t know what a movie would have to do to knock it off of its perch at the top. It’s got everything. Just looking at it as Spielberg’s art, it’s a real masterpiece. He created a whole different kind of horror movie.

Hmmm let’s see where’s that soapbox…? Here we go. Hey everyone reading this: GO SUPPORT YOUR LOCAL SCENE. It’s where it all starts. Wherever you are, you have local bands. Check them out. They might be pretty good. Spend that $5 to see those 3-4 bands. Support your local venues too. The only reason we were able to get this band going is because we have such a great support system in the town that we started. I always say it; you can’t have a great music scene without great music fans.