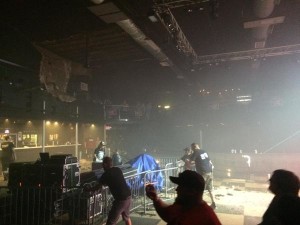 This could have been a lot worst than it was. Remember when the roof collapsed on a venue the night before KISS was scheduled to perform several years ago?

Hit the link for the video! >CBSLocal

The building was evacuated after three to four concertgoers were injured. Two people were taken to the Hennepin County Medical Center for evaluation.

A source said the “reverberation of music” caused a leak in the pipes in the ceiling, and the tiles fell down after becoming saturated with water.

The music venue was hosting a performance by “Theory of a Deadman.”