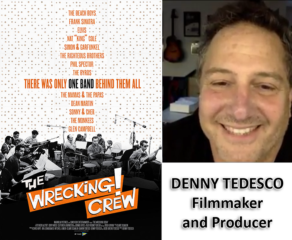 The Wrecking Crew is a 2008 documentary film that covers the story of the Los Angeles-based group of session musicians known as the Wrecking Crew, famed for having played on numerous hit recordings throughout the 1960s. Filmmaker and producer Denny Tedesco talks about the putting the documentary together and his highs and lows throughout the
END_OF_DOCUMENT_TOKEN_TO_BE_REPLACED