From: UltimateClassicRock Aerosmith‘s next tour might be the beginning of the end. The band has announced a run of European dates for the spring and summer of 2017 — a series of shows they’ve dubbed “Aero-Vederci Baby!” and are billing as their “farewell” tour. The news comes several months after singer Steven Tyler publicly suggested
END_OF_DOCUMENT_TOKEN_TO_BE_REPLACED 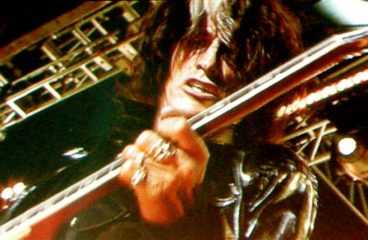 Published July 11, 2016 FoxNews.com Joe Perry collapses at concert Never autoplay videos Aerosmith guitarist Joe Perry is in stable condition after he was taken to a hospital during a performance in New York. Perry, 65, became ill around 9:30 p.m. Sunday while performing with Johnny Depp and Alice Cooper in his side band, the
END_OF_DOCUMENT_TOKEN_TO_BE_REPLACED

After 40 years and a lot of hits,misses and rocky roads. Is Aerosmith really over? chuck [hmtad name=”Adsense Unit 1″ align=”center”] From; Taste of Country Please support our sponsors! Are you near the Madisonville area? Be sure and go by DAVE’S STICKY PIG BBQ! The rock band was originally slated to play shows in early 2016,
END_OF_DOCUMENT_TOKEN_TO_BE_REPLACED

Steven Tyler was in Nashville recently and gave a unplugged show at The BlueBird Cafe! For someone who is 67 years old,he is pretty much spot on without any effects on his vocals. The young guns these days should sit back and take notes from a professional. (not the drug abuse part but singing!) (Check
END_OF_DOCUMENT_TOKEN_TO_BE_REPLACED

KickActs is trying hard not to follow the trend to post every “awful” news story that falls on the ground like today’s story about the Subway guy. But if you are interested in that crap, it’s >here<. 🙁 If you are looking for something cool and exciting. Check out Steven Tyler’s new country music video
END_OF_DOCUMENT_TOKEN_TO_BE_REPLACED

Aerosmith rolled into Evansville Indiana last night and what a freaking awesome sold out show!  I saw people from all walks of life attending it. From little kids to folks that were probably great grand parents! The opening act was the band “Living Colour”! Everyone should be familiar with their hit “Cult of Personality” from
END_OF_DOCUMENT_TOKEN_TO_BE_REPLACED

Finally someone is getting the hint that books for the Ford Center…If this show doesn’t sell out, well, the Tri-State is deep country poo poo and they should lose their right to carry a ROCK CARD! Go see a real band people…These guys are the real deal. They have so much more to offer than FGL
END_OF_DOCUMENT_TOKEN_TO_BE_REPLACED

Pretty cool pro shot video from just the other day…A couple of things to point out though. The guy behind the amps playing keys and singing the high parts and the HUGE teleprompter rolling the lyrics off in front  of Steve Tyler…:( It’s only rock and roll but I can’t remember it… https://www.youtube.com/watch?v=9L94PGiqr5s

He should have went to the Brickhouse 🙂 chuck@kickacts.com