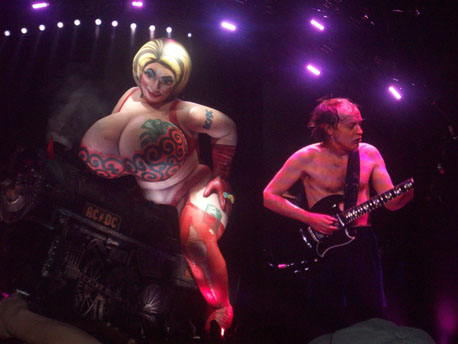 Wow what a show is the first thing  I can say! From the word GO! They ruled the stage. A totally professional act in all areas. But first I have to mention the opening act “The Answer”. They are a rock band from Ireland that is touring with AC/DC on this leg of the tour. They have a tough gig considering the main act hasn’t been out for eight years and the world is wanting to see them!! But “The Answer” rocks!! I can only describe them as a combination of Led Zeppelin met Nazareth in an alley and they had kids. Good guitar player and singer kids that is!! Good classic music with those Dan McCafferty type vocals. Now to the main event! I have seen AC/DC several times before and they never fail to deliver the goods. These guys know how to put on a show. From the opening chords of  their new single “Runaway Train” from their current album “Black Ice” until the final encore “For Those About To Rock” it was a non stop balls out rock n roll show!  AC/DC is setting themselves up to be the largest grossing concert of 2008 and 2009. Their shows sell out in just minutes. I had the pleasure of going to Nashville with my son Josh and Brittany, one of my daughters’, and her husband Zack. My childhood friend David Lutz also went with his wife and another friend. David had closer seats so I slipped him my cheap Kodak camera and he snapped off the photos I am using for this article. 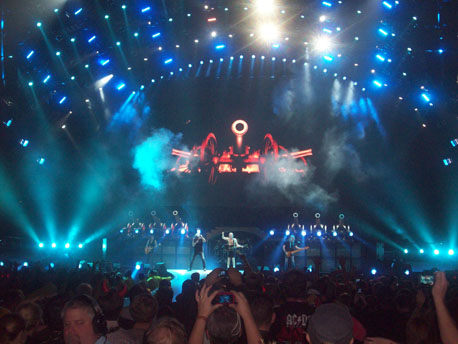 Back to AC/DC. If you missed it, well, your loss. You should have gone. They are one of the few remaining bands that really know how to do it right. They played almost all of their hits and some new ones too.  I don’t want to give away too much of it but they brought along Rosie, the AC/DC bell, a huge locomotive and those kick ass cannons!!

As I watched them on stage, as a fellow musician, I tend to watch everything. From how they stand, to hand ques, roadies running around behind the set  … etc. You get the picture. The thing I think young bands including garage bands like the ones I play in is that there is a time and place for everything but there also should be “respect”. Granted AC/DC has been playing since 1974, their shows run like a well oiled machine. When Brian Johnson is singing, he is up front and entertaining. No one steps into his moment. When there is a vocal break and a guitar solo comes up, Angus goes to the front of the stage and tears the guitar up. While he is doing this, the rest of the band is behind him but not stepping on his turn. When the guitar only needs Malcolm’s powerful rhythm, Angus is out of the way and letting his brother shine. This respect carried on for the Bass player Cliff and drummer Phil too. No one in that band had to step in out of turn for ego’s sake to “show off”. The music breathed on its own and was allowed to. They made it seem easy and really it is if you think about it. As a band, whether a touring band or a garage band, take your place and play your parts and not step out and step on every one else’s stuff. I see it all the time. I have been guilty of it too so I’m not throwing stones. I am taking this to heart too. 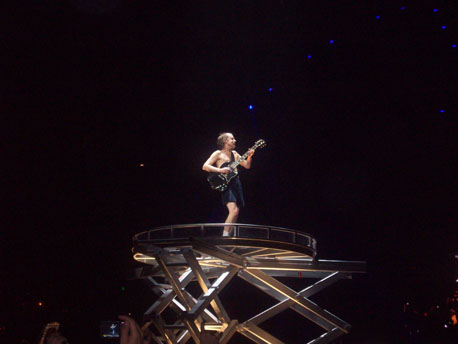 And one other thing before I go. AC/DC puts most bands half their age to shame. These guys are in their mid fifties and older but they kicked it hard for two hours. So for you young rockers out there, step aside and let the real guys show you how it’s done. If  you missed the show, buy the concert DVD when it comes out and see what I mean about kicking ass. They didn’t use any backing tracks/sampling  or extra musicians hid behind the stage like a lot of touring bands do. It was just those five guys and a wall of sound!! The way Rock and Roll was meant to be!! 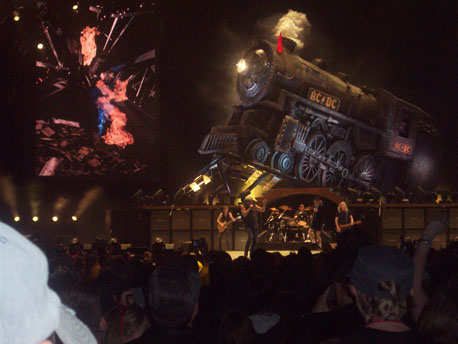 For those about to ROCK!! We salute you!!