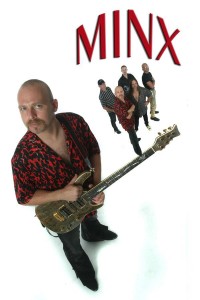 1. Hey Bob, welcome to Kickacts. com. Tell us a little bit about yourself.

I’ve been playing music since I was 6 years old. I have been in a band playing the club scene since age 14. I’m married and we have 3 children. I like working, Nascar, golfing and making guitars.

2. You play guitar in the band Minx. Tell us about the band and who is in it and the website address.

My guitar is one I made it is a Friendly Guitar. Line 6 Pod Pro preamp, Carvin 50/50 tube power amp, Sonic 212 Cabinet loaded with Greenback Celestion speakers, Peavey 31 band eq, Yamaha Psr 500 Keyboard, Mic is an EV 967, No effects.

First a band is like a marriage, it is give and take. Russell and I have played on and off for 25 years. It appears him and I are the only ones that can put up with each other. We like to have fun and love to play music.

Every weekend we play is special to me. But one stand out was when we opened for Firehouse and Vixen.

No certain one comes to mind, but the nights with equipment failure and brain fart for words tend to be the longest nights.

7. You guys pretty much ruled Double Dukes for years and were their main band until they recently closed. With that gig came some hate or jealousy from other bands that couldn’t get in there. There were some pretty mean spirited messages on band nut about your band. Want to address that?

I don’t ever read band nut. We just make noise and have fun. I feel I’ve something to learn from every band out there. There are a lot of clubs that we can’t get into due to band and management relationships. That’s just the politics of the business. 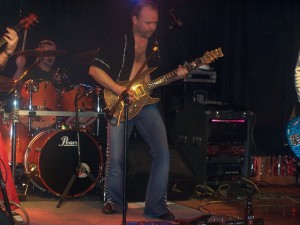 I love all genres of music. No one hero stands out.I grew up playing with moms Ventures, Elvis and Three Dog Night records (real vinyl). As for my inspiration, my Grandfather played bass in a band and got me started playing.

9. You are also into building your own guitars. How did that get started? Ever thought about building them and selling them?

It all started when I inquired about have a custom guitar built. I looked into several manufactures such as Brian Moore, Godin and several others. It was going to cost around $9500.00 for a make to my specifications. I figured I could build it cheaper. Boy was I wrong. Just kidding. Yes I would consider building for others but it is all hand craftsmanship and they wouldn’t be cheap.

Loved or hated I plan on making noise until they lay my body to rest. I don’t understand why all of us musicians can’t just get along. We all have one common intrest, MUSIC. Minx members don’t make a habit of bashing other bands. We like to see other bands and learn from them. I feel every band has something special to give. “It’s BEER O’CLOCK!!  1, 2, 3 GO!!!” Because “the more you drink the better we sound.”