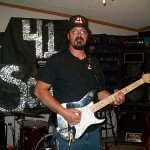 There you have it folks … Most bands have no idea how important it is to inspire and to meet your fans. Apparently Lynyrd Skynyrd knew it was important and changed Big Nick’s life forever. Enough for him to break out the all “CAPS” button … Do you have a story to tell also? We are waiting on you… Send it to