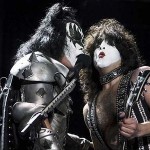 KISS recently held a contest to have “their fans” book the new concert tour. The City with the most votes gets KISS in concert first, and so on and so on down the line. Well, a City in Canada, namely, Oshawa was the winner. Well, apparently do to some snafu’s they were not listed in the published tour schedule  and the fine KISS fans of Oshawa got pissed and the media picked up on it and reported it. We didn’t report it because, well I don’t give a fuck about Oshawa Canada (no disrespect meant though) and when I saw that the tour schedule didn’t have Evansville on it this time around I thought screw them. Funny how KISS has stopped off in Evansville probably no less than ten times in their career but this time they’re not . WTF? Maybe it’s on the second leg of the tour but just for rants sake, it’s not listed now. So back to my story. Gene issued a statement saying that the news media has ruined KISS’s surprise for the fans in Oshawa. Here is an excerpt of what Gene said…

“I’m really pissed off at the media for creating this nonsense,” Simmons told The Canadian Press in an interview. But Simmons says the media stoked the flames of the angry fan backlash and ruined what was supposed to be a surprise.

Simmons says the band had planned all along to launch its new album, Sonic Boom, in the city, but was forced by the media to make the announcement early.

“You know, here’s the history of the way we do things: you treat everything and everybody special, and because of who and what Oshawa is, which is near and dear to our hearts, because (they) won the No. 1 spot above and beyond New York, L.A., Toronto, Vancouver, we wanted to do a huge campaign.”

“(The media) never gave us a chance to treat Oshawa special.”

Gene went on to slighty insult KISS fans in the same article.

“Respectfully, the fans aren’t qualified to understand how things are done … (they) don’t know how things work,” Simmons said.

So back to me.That sounds fair enough, right? But then Paul, who has has a history of at least telling the truth while Gene spins yards of PR bullshit released this statement after Gene’s and is also found in the same article. Hear is an excerpt…

“You may hear a slightly different story from Gene, but so be it,” Stanley said. Stanley said a “comedy of errors” led to Oshawa being left off the tour when an incomplete schedule was announced.

“The media was carrying the dissent and upset feeling of the fans. They weren’t creating anything, they were reporting it. Don’t blame the messenger.”

So there you have it for the folks out there that care. Another example of the inter working of a huge band with two leaders. One has a huge inflated ego and is a spin doctor and one who sets the record straight.

You can find the entire article here…