E.T. NO BOO!
Written by Chaz 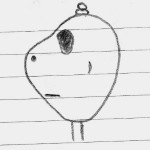 A good ghost story? Not really.  Hey! It’s the season for ghouls! Unfortunately, I have no ghost stories to tell.  So what’s the next best thing, besides knowing a guy that had a friend, who knew a girl that was married to a guy, that after losing his job at the chicken farm, went nuts and killed all of his coworkers?  And to this day, still haunts the dreams of our children who love McNuggets?

Maybe they GPS your ass and check-in from time to time to see if you have been helping advance or degenerate the human race.  Kind of like the government…that’s a joke.  Maybe?

OK.  For you, my friends.  I offer a very small collection of stories, all involving aliens or something related to our friends from unknown worlds.  I make no claims concerning the authenticities, nor do I claim that what I saw was really that of unknown worlds.  The following stories all are factual, according to my eyes…and in some cases, according to a child’s mind that has yet to be exposed to the idea of aliens.  That makes it intriguing, yes?  OK. Maybe not! Which brings me to my next claim, or not to claim…and that would be your own interpretations.  I know what I saw those nights.  I know what I dreamed and I know I love my late grandmother.  So enjoy! And be sure to watch the sky…or your bedroom window. 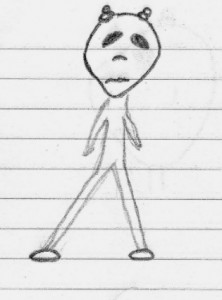 I have vivid memories of certain parts of my childhood.  On this particular evening, my family had piled into the living room to watch TV.  I’m sure it was the A-Team or something along those lines.  My mother had her chair. My father had his.  My brother and I were usually wrestling or lying on the floor.  It was dark outside and at this time I was doing a favorite pass time of mine.  Wearing my fathers tube socks and sliding across the hardwood den floor on my knees.

I do remember sliding across the floor, towards the windows on the south side of the house.
I looked up to see this “thing.” I say “thing” because I had yet been exposed to anything alien-like.

I was around 6 years of age and I don’t even think I had seen a horror movie yet.
It was close to that age and it was A Nightmare on Elm Street, thanks to my older cousins, but I digress.

I looked up and this “thing” was at least seven feet tall.  It had a dark golden hue to it.
It’s head was round, but pulled upwards and out a bit.  It also had some sort of tiny antennae.

Scared the hell out of me!
Looking back now, it kind of reminds me of C3-PO from Star Wars, but on steroids.

Let’s Race!My mother and I were driving home late one night after visiting my aunt and the cousins. 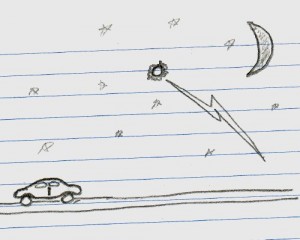 I was in the back seat looking at the stars.
I noticed this one star that seemed to be following us.

I can’t remember if it had a color.  There was no trail behind it, but it did seem to be a tad larger than the other stars.  It had been  following us for nearly 4 miles of our 9-mile trip and then it changed course and flew like a meteor across the sky.  It had a solid tail of light behind it, not broken or dust like.

Read on.
The next two stories, are in my eyes, the best, most detailed and to this day…unexplainable. 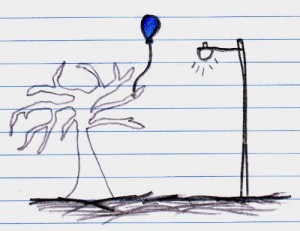 Grandma was always having some sort of trouble with her in-laws.

The in-laws wanted the farm.  And on occasion, the county police would have to get involved.  On a nice cool Fall evening my grandmother noticed a bright blue light in her drive way.  She instantly thought the in-laws were causing more trouble.

She made her way to the driveway.  The blue light started to rise.
My grandmother had a dusk to dawn light at the end of her drive way.

It probably reached 30 feet into the air.  As she walked closer, this blue object rose higher.
Once it got to the top of the dusk to dawn light, it grew larger and disappeared.  All of her electricity shut off, like there was a surge.

After 15 minutes or so, her electricity came back.

She told us grandchildren that “they” had to refuel.
And for years, she swore that she was visited by aliens who were just looking to refuel.

Fast forward a couple years…a light in the field, moving side to side!
My grandmother calls us and we come to check on it, my father with .44 in hand.

Turned out to a balloon caught in cut corn stalks.
Lucky it wasn’t an alien!  Dad would of went Dirty Harry on him. 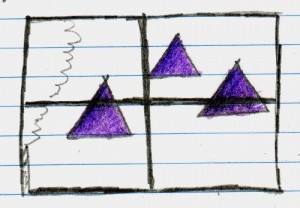 And the last story!  I know you’re shaking with anticipation. I’ll make this one quick and simple.

This story actually starts around the time I was eight years of age and wraps up around 2002.

I woke in the middle of the night, looked outside my bedroom windows to see three purple triangles.
They were quite large in size.  They seemed to be floating in the air.  I went back to bed and thought nothing of it.

I knew nothing about aliens, unless Stars Wars qualifies.

I was working in radio and I had to be at the studio by 4:30am.
I was living in Illinois at the time, which meant that I had to get up for work around 2:45am.

I was listening to Coast to Coast AM during the drive to Evansville.
They were discussing various types of spacecraft.

Then I heard it. Purple Triangles! Really?  Seems like other people have seen the same as I.
So finally, after 20 years or so, I had learned the truth about what I had seen that night.

Scared?
Maybe I have microchip in my ass.
Maybe there is some truth?

Don’t underestimate the power of the mind, nor the gateways of our souls…the eyes.
Sometimes, what you see if what you get and what you might have been trying to understand has always been in front of you.

Ghost stories? None…although I have done my share of going to graveyards and sites of legendary accidents. What else does a high schooler in Midwest America have to do for a scare on Halloween?

I do remember an old ran down house that was used for Satanic Rituals…a good scare none-the-less.
But no ghost. Pure evil? Maybe.  Aliens?  You just missed them, but they saw you.