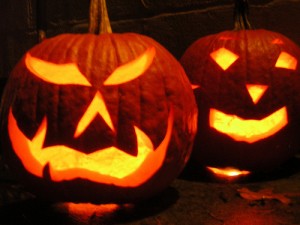 Ok, the weather is changing. It’s got that certain “feel” in the air. It’s different than any other time of the year. It’s “that” time of year, Hallow’s Eve, All Saints’ Day, or Halloween as it has come to be known as. It’s time for witch’s brew and bonfires to appease the spirits. But what about those spirits that is in us somewhat older folks? You know that teen spirit that still wants to rise up too? What about that?

It’s one of the few seasons of the year that I really miss the most as a young teenager growing up here in Henderson… Though it is considered “wrong” to steal pumpkins it was a favorite ritual that we did as teenagers. (“We”, meaning all the boys that lived in our neighborhood.) Long before we were driving and dating and all the other coming of age rite to passage things that got in the way we stole pumpkins every year. Funny thing was, we would steal them but we wouldn’t burst them. We would stash them up by the railroad tracks near were we lived. We once got picked up by a kind police Officer for snatching a pumpkin off of a porch. He explained to us that even though the pumpkin only cost a dollar (hey it was 1979 or early 80’s) the home owner was going to prosecute us if we didn’t return the pumpkin. Luckily for us, we still had it and returned it and everything was cool… Fast forward to “now”… We have all grown up physically and some what mentally…Back in 1979 we were in our teens. I was 14. Today I am much older… I just turned 44. In my mind I am still a young person and recently started longing for those days gone by. In fact, I was talking with a childhood friend about those “good ole days”. He too was one of the neighborhood kids that I ran with. We talked about how we would dress up and go “trick or treating” during the day and after dark we would snatch pumpkins. Turns out, He misses those days too…Then it came to me “like a bolt right out of the blue” to quote an AC/DC song.

I said to him, I remember watching a movie about a bank robbing gang that had long since retired. They got back together after all those years for one last job. To see if they still “had it”. Well, I told him, I wonder if we still “have it”.” So this idea starting brewing. How bout one final run this year? Surely we could still do it. I mean I have put on a few pounds since then but I can still run. So has he and he can still run too…So we began to build on our game plan. This time we will do it a little differently. We won’t snatch craved pumpkins. I mean, let’s face it. We are older and somewhat more mature and I really don’t want to snatch a craved pumpkin that some child has carved. So carved pumpkins are out. We will only snatch whole pumpkins. We will also do it only in the neighborhood that we all grew up in. (It’s just for nostalgic purposes) And, we will limit ourselves to no more than five pumpkins. That should be enough to satisfy the youth still hiding in our hearts. And to show that we are somewhat grown up, we are going to send the houses that we snatch pumpkins from an anonymous letter with five dollars in it to cover the replacement pumpkin. That’s the game plan. So for one night only this October  I get to be 14 again for one last run…So this year if your whole pumpkin comes up missing, it might just be us making that one last hurrah!! So be sure and check your mail …But I am also making plans for when I turn 55 🙂