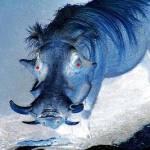 Here it goes. Back in 1994 my brother drug me off to go deer hunting at the Higginson Henry wildlife preserve.I didn’t want to go, not my idea of a fun Sunday afternoon. It was November,  still slightly warm and sunny. We walked about 2 miles back into the forest.we came to a clearing ,basically a field surrounded by woods on all sides. We both set down up against trees facing the south end of the field,id say it was about 3 o’clock . As we set and waited my brother soon passed out asleep. I however had the pleasure of setting and staring at the opposite end of the woods. Soon I began to notice something strange about a tree at the opposite end of the field.
I was probably at least a football field away from the tree so I could make it out with the naked eye. It appeared that out of the left hand side of the tree… a boar’s head was sticking out of the tree. I pulled my rifle up so I could look through the scope and I could make out the tusk, snout, eyes and ears of a huge boar. But the odd thing is the tree was only probably 3 feet across so I should have been able to see the boars ass end and hind legs. But of course I couldn’t or this would have just been a story about me seeing a stupid wild pig.
I set and contemplated shooting …but as an avid Stephen king reader I contemplated what if whatever I was looking at didn’t die if I shot  and as the sunlight grew dimmer the head of this thing seemed to be slowly moving from the side of the tree to actually facing me .
It was now near dusk, the light was slowly dieing and my fucking brother was just snoring away. I peeped into the scope again and sure enough the boar was staring me eye to eye and the thing I recall about the eyes was that they where a dim green.
Something was still telling me not to shoot and then just to make things even more fucked up I looked up and saw a nice fat full moon rising in the sky. That’s when I noticed that the naked tree branches began to make the shapes of skulls….not just faint I guess if you look at a certain way it looks like a skull ….but no doubt about it skulls.
Finally though as if by some act of God my brother woke up and asked if I’d seen anything. I said no cause I just wanted to get the hell outta there.
I didn’t look back I just hurried out of the woods. It’s really hard to actually explain what I saw. I wasn’t on drugs… No drinky. Nothing… Stone cold sober. I have never gone back to Higgingson Henry and really dont want to.