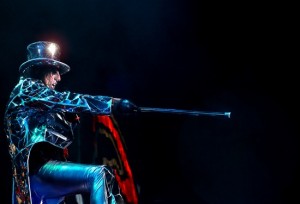 And he talks about his album “From The Inside”. Hands down in my opinion his best work. Here is my review of the album.  http://www.kickacts.com/2009/01/18/alice-cooper-from-the-inside/

Here is an exceprt from the interview:

Apart from being your drinking buddy, Bernie Taupin also co-wrote From The Inside, your concept album about your time in an insane asylum. Please elaborate on that.

AC: Well Bernie was my best friend before I went into the hospital so when I came out I said, “Bernie, I’ve got a wealth of material. We have to sit down and write this.” I was in a mental hospital where every single character in there is a song. I started telling him about the characters and when we started writing the lyrics I would do one and he’d fire one back at me, it was like a ping-pong match of lyrics. It was fun, it was sort of like duelling with each other. And we’d always try to leave the other guy with one unrhymable last word, you know? [laughs] So Bernie and I would sit there and I’d tell him about characters like Jacknife Johnny, a Vietnam vet and I’d say “Ok, here’s the story – he married a girl, he came home, everybody rejected him and then on top of it they rejected him because he brought home a Vietnamese girl” and so it just started right there. And pretty soon we’d written a whole album like that

Here is the link for the rest of the interview!!