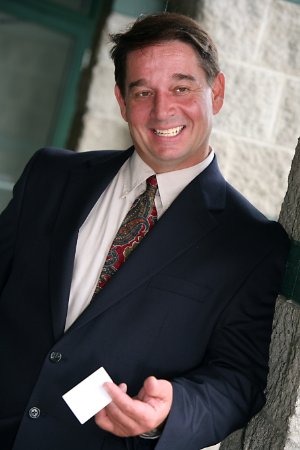 1.  Hello Louie and Welcome to Kickacts.  Tell us a bit about yourself.

I would probably consider my self as plain as beans and taters.  I grew up
on a small farm and now I live on a bigger farm in the country.  With the
Wife, a son and a couple dogs and cats.  But I have had a interesting life
and a new career that I am really enjoying.

2. You used to own the best record store Henderson. Do you miss those days and all the new releases that came in on Tuesdays? And do you still keep up with the new releases?

Those where some great times at Party Time Records.  I was in my 20’s and
what could be a cooler job than owning a record store.  There was a lot of
great new artists and new sounds developing then.  I would have to say I
don’t really keep up with all the new music like I used too.

3.You switched gears and now you’re an Actor. What is the biggest misperception of “acting”?

I think that most people think that acting is EASY.  It is really pretty
hard to do it and do it well.  Kind of like singing,  many people think they
sing great and should have albums out but reality shows like Idol and
Americas got talent tend to shed a light on who can sing and who can’t.  A
Actor will go to audition after audition to get a part.  A lot of effort for
anyone to keep on doing it with out getting a call back or a booking.  Many give up or get a bad attitude because they aren’t getting booked.  The Audition process is tough.  When you do get a part, you are looking at being on a set for a 10 to 16 hour day.  Not to many people want to be at work for such a long day.  When you do a part in a film it could be 12 to 16 hour days for weeks.  It takes a special type person with that kind of endurance that can perform on cue and take direction.  Though it is long hours it can be lots of fun.

4.You also have been in music videos. One including the famous “Van Zant”
brothers. what was that like and what is a typical day on a video shoot like
that?

The Van Zant shoot was one of those Long Hot days.  Revolution studio in
Nashville shot this one.  They are the one’s that shoot most of the big
music videos in the Nashville area. We shot it on a farm location east of
Nashville. It was a 12 hour plus day in 100 degree plus temps.  The clothing
we wore was period type clothing made of wool.  So everyone was feeling the
heat.  The Van Zant guys where some great guys.  The party scene toward the
end of the video was a lot of fun.  It was shot on 35 mm film and looks very
period like they wanted.   The Love Drug video was shot in Chicago and there
was a lot of green screen done on it.  When you are doing green screen work
you have to be able to take direction very well.  There is a green screen
behind you and a camera in front of you and thats it.  The director has to
be able to get the actors to do and react to things he is planning to edit
in with out seeing it.  It is a fun and interesting process.

5. You are seen here locally on a few TV commercials. Which ones can we see
you in? 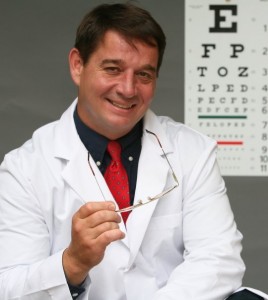 I have done a lot of commercials over the years.  They run in different
market areas.  I will be in another city and have the TV on in the hotel and
there I am.  Kind of weird at first seeing yourself on TV in other big
cities.  The ones that I know that have shown in the Evansville market area
is Eye Mart, Evansville Airport, Circle K and I am not sure which other ones
have.  It is funny when some one calls you and says did I just see you on TV
in your underwear drinking coffee at Circle K?  Yep, that was me.

6.  Tell us a unique experience that has happened to you?

I Also do voice overs for commercials and movies.  I got a audition notice
for a beer commercial in Nashville.  The audition notice basically said need
70-80 year old southern black gentlemen. A real southern gent that has
lived in Alabama or Georgia his whole life.  White guys feel free to try,
but we really need a real southern black gentlemen.  send your audition in
say your name and phone number and read the script twice.  It sounded like a
challenge so I sent in a audition.  I got the call and booked the part.  I
go to Nashville the next day to the address they gave me and I wasn’t sure
where to go in the building, so I called the producer.  He said he would
send the sound guy out to find me. He said,  Where are you?  I am standing
on the corner in front of the building.  This young sound guy comes out
looking in every direction and I am the only guy standing any where on the
street.  He looks at me and says,  Louie?  I reply ,yep.  He says in to the
phone, got him.  As the sound guy and I where walking into the studio I
asked him if he was looking for a older black gentlemen?  He said, the
producer didn’t say but he was lead to believe that.  We both started
laughing.  In the studio when I started do the script in the voice the sound
guy was amazed and asked where did you get those pipes?

7.  So you have been in a lot of Films.  What type of films and what type
characters do you do?

I stay really booked up doing films all over the mid-west.  From Chicago to
Nashville, St Louis to West Virginia and about every where in between.  You
can see some of the stuff I have done at my IMDB link
http://www.imdb.com/name/nm2623547
As a actor I would be considered a character actor.  I play a lot of
different type roles.  I have done over 80 short films and Feature films.  I
was in 5 Feature Films and 10 shorts in the past 6 months.  I try to put
some clips and trailers to stuff on myspace and youtube.
www.myspace.com/louielawless  http://www.youtube.com/4louie     I have a
couple features that are being marketed right now.  Scorned (
http://www.youtube.com/watch?v=zWunC-g_YM8  )  which was shot in the
Evansville and Owensboro area last fall by Aspiring films
http://www.aspiringfilms.com  .  It is a horror/ thriller that is being
marketed to be put out on DVD.  I play a bad guy in this one. They will be
having a local premier for it in the next month or so in the Evansville
area.  Another one shot in Indianapolis that will have a premier showing in
the next month or so is TOW.  http://www.towthemovie.com/CastCrew.html  It
will be a nice film.  A Guy meets a Girl, both with haunted past.  They fall
in love and the past comes back to haunt them.  It is a Drama. I am playing
the small own sheriff in it.   This summer I did a Comedy/Horror film in
Indy called ” My Bloody Wedding”  Morgan Mead, which is getting a lot of
buzz in the movie business was writer and director of the film.  you can see
the trailer at  http://www.mybloodywedding.com/main.html
Watch the trailer on it, it is hilarious.   I could go on and on about other
films but lets move on to another question. 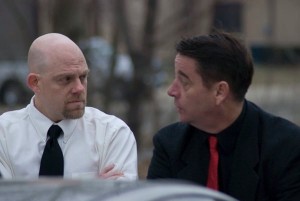 8.  How long does it take from the time a film is shot until it is being
marketed to theatres or DVD?

A Feature Film could be shot and could take 1-2 years before it is finished
editing and ready to market.  Seems like a long time but there is a lot
involved in the editing and marketing process.  Short films that go to Film
Festivals probably take 3 months to a year to complete and get out there.
Here is a link to “Don’t see it Alone” trailer.
http://www.youtube.com/watch?v=p5MpA6PvWF4 It is a 30 min short that was
done in about 6 months.
Film do get done and seen faster.  There is the 48 hour film festival that
is done all over the world.  It is where a film is written, filmed, edited
and turned in in 48 hours.  Then they show them.  Here is a couple that I
have done in Ohio.  http://www.youtube.com/watch?v=rf-W8FA1aYo
http://www.youtube.com/watch?v=jfYJbLJZz0U&feature=player_embedded
A fun challenge for film makers and actors.

I have done a few things.  I was on the Gene Simmons “Family Jewels” show.
I was one of the derby party guests.  I have done a few TV pilots in the
past year.  One was in Nashville called “Hell Bent” .  I also did a TV pilot
with Comedian Bruce Bruce that is being marketed to the Cable networks.  It
got some Big interested when it got shown on the Jay Leno show.  It is
called ” Bruce Bruce Bounty Hunters”
http://www.brucebrucebountyhunter.com  It is basically the worlds
worst mismatched bounty hunters.  So the comedy
scenario plays hugely. 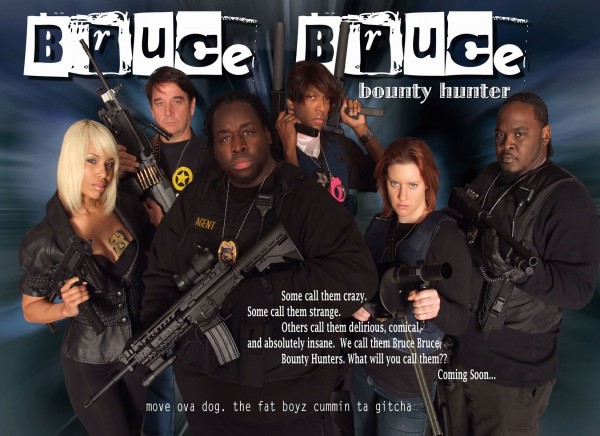 10.   Shout it out Loud.
Chuck, I have a bunch of Feature films and a TV pilot that should be hitting
through out next year.  Should be a great Year.  Everyone can click the link
to my IMDB page ( Internet Movie Data Base) The more clicks the higher my
Ranking and the bigger gigs I get so click here tell all your friends to
also. http://www.imdb.com/name/nm2623547  I appreciate everyones support.
Also for any one in the Indianapolis area they can attend the premier of
“TOW” a feature film that I was one of the lead charactors this friday
night.  Tell them you are one of my friends and you get in Free!
http://www.pingg.com/rsvp/2ax4x5kmyqhkkrzqq
I Hope every one has a great Holiday Season!