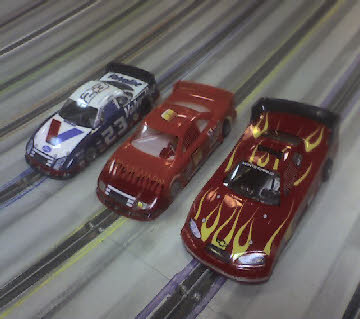 Slot car racing at its best.

We are midway through the Grand National Winter season at FastLane Raceways in the Washington Square Mall. The Grand National Class is run on Thursday night starting at 6:30 PM. The race consists of each racer running a three minute heat in each of eight lanes. The main feature of this class is that there is a limit on how fast a lap can be run. If the racer goes below that (Breakout) his lap doesn’t count. The Breakout allows novice racers to compete on a more level field with the more experienced racers.

At first glance these cars look to be just toys, but when the green light comes on, IT IS ALL OUT RACING.  And when compared to the cost of other types of racing they are far less expensive. And when there is a spectacular crash no one gets hurt and there is not much damage done to the cars.

The points lead has been going back and forth between Rick H. and Les B. for several weeks now. Many of the heats have seen the lead switch back and forth between these two racers, and often the outcome is decided within inches.Even with the racing as close as it is, the racers joke with each other when they have lost a lap from a breakout or a track call that gave someone else the lead.

The season will end on March 25 and the racing will continue to be a close contest between these two drivers. As to who will come out as this Season Champ, Come out and see and enjoy for yourself!

“Welcome back to the Sixties”