The stage at Roberts Stadium was lit up Saturday night by three very talented country music acts. The show was scheduled to start at 7:30, but as we entered the stadium at 7:15 the music had already started. We made it to our seats in time to see the last two songs  from the opening act which consisted of a female singer with a beautiful voice accompanied by a fellow playing the fire out of an acoustic guitar. We didn’t know who it was, but we were amazed at how good those two sounded.  Turns out it was Sarah Buxton (Outside My Window; Stupid Boy), who just came out with her first CD. In between songs she engaged the audience with her fun personality, which kept our attention throughout her set. 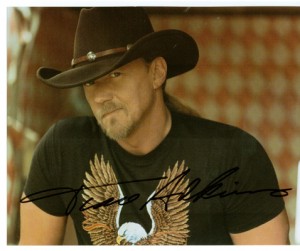 The 2nd act was very entertaining as well. I had heard many of Trace Adkins’ songs on the radio, but never payed much attention to them. When he took the stage all of that changed. Seeing him perform live made me realize just how many great songs he has put out over the years. He is a big redneck man who does big redneck songs and does them well. He only slowed down for a couple of songs, one of which hit #1 in ’07 (Your gonna miss this). In between songs Trace kept the audience captivated with his dry wit and humor. For an encore he performed “ Muddy Water”, a song about being baptized, and said he hoped that would make up for the other songs he did which might have offended some. By the crowds reaction no one was offended, and with a group of African American background singers from Evansville accompanying him, he ended his set creating an atmosphere of a southern Baptist revival meeting. 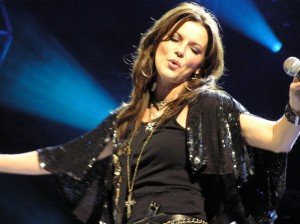 Martina Mcbride was the last performer of the evening. With her amazing voice and award winning songs she was able to entertain the audience until her last tune, which was “Living on a prayer” by Bon Jovi. Martina even took a ride over the audience on a swing shaped like a moon, which took her to another stage set up in the middle of the crowd. When she arrived at the additional platform, she performed two songs then walked back to the stage amid cheering fans. She blew the roof off the stadium several times with her ability to hit and sustain high notes , especially when she sang “Where Would You Be”. She ended her set with the Bon Jovi cover, as the audience celebrated by knocking beachballs around the stadium, including on the stage. This circus atmosphere was a great way for Martina to end the show.