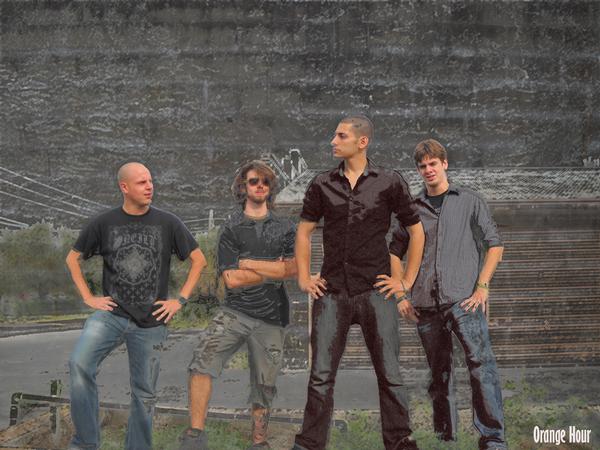 It was a good day already and it seemed to be leaking over into the night. I’ve had some memorable nights at State already, but tonight was going to be extra special. Not only was tonight going to kick ass, but I came to see Orange Hour (ones I previously wrote about little while ago), I mean they were great the first time I had saw them, and they played in a much smaller area than State. So this was going to be exciting.
This time we got there on time (yes I was early for something). Once my group finally all met up, we went inside. Orange Hour was coming up pretty soon, so we got our drinks and went to check out the show. A DJ was starting the show off. I have never seen this guy before (I had found out that was the DJ’s first show with them). I was thrown a little off guard but whatever…it’s Orange Hour. Like I had expected them to do, they started off great. The crowd was starting to get a little bigger and Hugh was thrashing away at the guitar. Although it was Hugh bringing in the crowd it was Darrell’s voice that kept them there. Nick was destroying the drums while Taylor seemed to play some wicked bass. Not even into the first song and a half and I know already its going to be a great show, and that’s when the trouble started. It was like Orange Hour was set to crash with the technical difficulties with Hugh’s guitar, but being the amazing band they are they just played right through it like it was supposed to happen.
Once Orange Hour was done, we all congratulated the guys on a great show. The crowd had really liked them. We went outside for a little break cause things seemed to get obnoxious really quick. Drunk people and stupidity seem to go hand and hand. The next band came on, and to be honest I wasn’t really into them. They had a nice mix of trombones but other than that they were just like any other band coming through. (No offense guys.)
I had missed the other band before Bad fish, but I was determined to see Badfish. I didn’t know what to expect. I wasn’t really into cover bands, and I am pretty sure they weren’t anything like Sublime. Well I had been wrong. Surprisingly the lead singer sounded just like Bradley Nowell, and the band did a great job mimicking the songs.
So for the conclusion (cause I know your all just waiting at the edge of your seat for it), Badfish did a great job covering the songs and getting the crowd moving around, but I think it was Orange Hour who took the show with originality and just all around sound. Like I said before and I’ll say again, don’t be surprised to see these guys in your area soon.