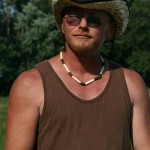 SPOTLIGHT ON ‘THE SPOTTSVILLE MONSTER’

Bart Nunnelly here, local author, artist and Fortean Investigator. I’m pleased to announce that my second film, “The Spottsville Monster – A Documentary” is slated to begin filming next month in Henderson, Kentucky. I’ll be teaming up with filmmaker extraordinaire and good friend, Chris McGill of McGill Media, LLC –
Louisville, Ky. – on this exciting project. ‘The Spottsville Monster’, an 8 foot-tall,hairy, man-like creature, first came to light back in 1975 when The Henderson ‘Gleanor’ ran an article about my family’s terrifying 11 month ordeal in the Spottsville, Ky. bottoms. But evidence suggests that the creature(s) has been around much longer than that. And is still around, with the latest sighting occurring in February, 2010!

The McGill Media crew will follow me as I go deep into the western Kentucky bottom lands in search of the creature, and film the testimony of actual eyewitnesses to the phenomenon – some of which may startle even you.