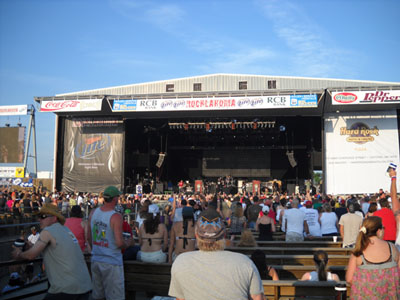 Rocklahoma 2010 is now in the history books. As in making…music history. This event was the best mix of the A’s B’s and C’s of ROCK N ROLL that I could ever dream of. Best described as a delicious audio assault of all things “ROCK”. A beach ball surfs across an enthusiastic crowd. A Frisbee flies over the hugs green lawns outside the VIP seating area. The helicopter giving rides to those who wanna take it a little “higher” flies by. Just then all of a sudden in the mist of this fun, …1,2,3,4 and then a drumbeat that demands your attention. The next thing you hear is the electric guitar that screams at you across the 130 foot wide Main Stage.  What’s it saying you ask? Let’s ROCKLAHOMA! 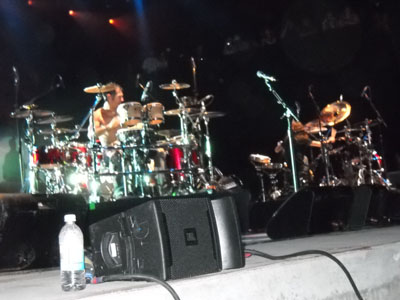 Overall musically, it was pure rock heaven. The line up beautifully mixed the best of the 80s metal and classic rock bands, with the modern hard rockers of today as well as excited up and coming youthful newcomers on the scene, with glam, arena, progressive and alternative all around the edges. Although it was almost not humanly possible to see all the acts playing, I did make a righteous attempt to see as many as possible and I’m so glad I did. Each one thrilled my ears with rock delight in all different ways. I arrived Friday to the down home feeling woodsy countryside in perfect time to hear a strong Saving Abel. Next up was Buckcherry which was a great amped up live show. Three Days Grace kept the modern rock energy flowing and increasing with melodic lyrics that like their muscled music leaves you wanting to hear more, despite the heat. I was not at all prepared for what happened next. Godsmack ROCKED my whole damn world!!! They were AWESOME. That is my best description. Undeniably one of the best performances of the event. Sully Erna and Godsmack made the transition seamlessly from the turbo charged sound of the opening song Awake, to the enticing sound of Serenity, back to the Encore of Whatever and I Stand Alone, and all songs between, without you ever knowing what was coming next. Taunting you with talent, with a mid-show thrill of revolving sets of drums moving to the front of the stage to deliver a duet by Sully Erna and Shannon Larkin that made my mouth fall open, it was energetic, in your face. This concert renewed my faith in the band. If you haven’t seen them live, it’s a good thing to do as soon as possible. It is still Friday. WOW. 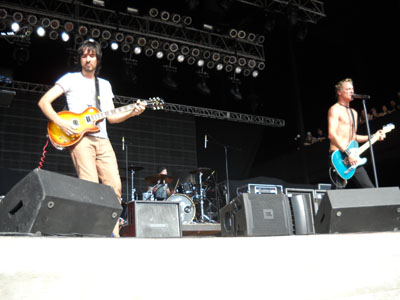 Saturday was packed with one rock pulse after another. Fuel delivered a half-hearted, not so sure we wanna be here, show. You could hear they used to like doing music at some point, just not when. They almost ran offstage at the last lyrics of their set. Not hard to get over with the “HELLO OKLAHOMA we are happy to be here” excitement of Saliva. They delivered each click click boom as rock intended…loud and hard. Fantastic show. Cinderella was up next and there is something about them going onstage that is contagious. People start moving a little faster with a bounce in their step. Not gonna miss this! Cinderella delivered the goods and did not let hair band/metal fans down at all. — What can you say about southern derived recognizable roarin’ guitars? That their name is ZZ Top! Sharp dressed men they were and so was their show. A lengthy show that left the cry of a steel guitar in the night.  Live, they are still on the… Top. Some fans were saying they were the best of the event. 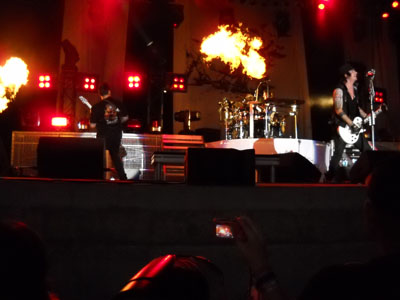 On Saturday night I found the Retrospect Stage….again. An 80s rock band stage with a bar around it! What’s better than that?? 🙂 Nothing I can think of!! While there, I unexpectedly heard a band as I wandered to the Retro Stage to take in everything after the long day…and that’s where I found the thing that moved me in that “get ya right in the gut” place!!! Drumming like I haven’t ever heard, that made me go “Oh My!!!” and run to the stage front when I heard them…It was The Last Vegas. They have to be one of the best sets I saw all weekend. Drums that will blow your mind, balls to the wall, straight up kick ass HARD ROCK as it should be. Agressive drum insanity, loud ear splitting guitars and a lead singer who could have any fan jumpin’ up and down in about 5 minutes with his infectious step up to the plate attitude. Shredding the 80s musically with the best of all that comes with that. A perfect 10 outta 10 for them. The Last Vegas is going … UP. GO SEE THIS BAND. They are the real deal! Excellent music. 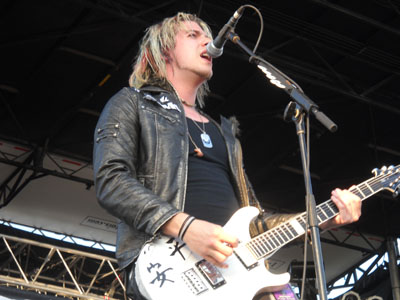 Sunday I woke up feeling like a 3 day ROCK concert but funny enough still wanted more! And ROCKLAHOMA had more to give us! The first show I saw today was Aranda and they are shredding guitar heroes ! They have a unique ability to blend hard rock and talent with amazing show presence and stage tricks to please! At this point I thought I had heard almost every style of rock going at this event. I was wrong. SEVENDUST takes the stage in the Oklahoma heat and put on the one of the best shows of the whole weekend. They shredded the lists of who’s who that were there. Their hard hitting “let’s put it to the ground” rock style is nothing short of concert nirvana! Lajon Witherspoon knows how to talk to the crowd and get em going and dedicated a lot of the show to the Armed Forces. That was really cool since it was Memorial Day Weekend. I would go see this band play live anywhere, given the chance. Sevendust is a band that is iconic, all around the real deal. After that fantastic show it was time for Theory of a Deadman to take the stage and boy did they. They were very crowd interactive! With heavy guitars and intense drums and Tyler’s lyrical range, this was an awesome show! A lot of people said the lead singer Tyler Connelly’s vocal cords do appear at times weak and I do have to agree that his cords might need a good break. Which no doubt happens when you tour for years and years, back to back to back, to any rock singer. It did NOT stop them from having a must see show! 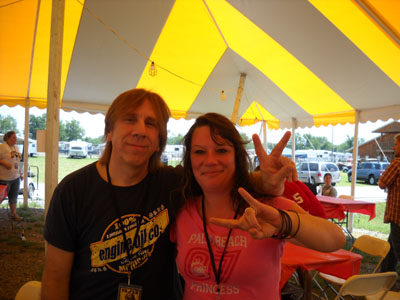 Just when you think you’ve seen it all…enters Chevelle. WHAT A SHOW!!! Modern Rock at its BEST. They played their Chevelle style that’s unparalleled and wow, can Sam Loeffler sing! His style and range changes are down right unbelievable and fantastic to watch! They even invited all of General Admission into the VIP seating area!! It was awesome! These 3 guys are going to the top without doubt. Tesla was well…Tesla. They rock ya like no one else. Major energy that just catches on like a feeding frenzy and it did! Tesla can rock …and have FUN that you can see is real, on stage and off!

I didn’t see all of Lacuna Coil but you could hear the massive stream of music that they were delivering in person as if it was to each person there! They ROCKED! 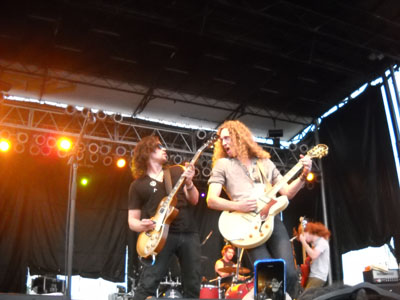 Taddy Porter played an unforgettable show on the Hard Rock Stage Sunday! They mix of modern hard rock with southern classic roots and energy that is magnetic! This is my “GOTTA GET IT” CD pick! It will be on shelves June 29th. New Medicine, hailing from MN, played electric in concert! Kick ASS show! Their new single is The Takeover you gotta hear it! Shaman’s Harvest play an amazing live show and are insane with guitar shredding madness and addictive lyrics! Their single Dragonfly is on fire! Get the CD ” Shine” asap! Like A Storm, from New Zealand, is touring America and loving every minute of it. So is anyone who sees their show!! They have a new energy packed all things rock sound that screams for more!

Although youthful when they start playing and singing you would NOT know The Nigel Dupree Band are newcomers to the scene. They have an 80s metal influence that they beautifully blend with the modern rock sound of today. They have said a HUGE ” Hello!!!” to the music industry and I can’t wait for what’s next. They are addictive to watch. Nigel’s ability is as if he was born to rock. Uncanny. Excellent show. (Nigel is the son on Jackyl leader, Jesse James Dupree.) 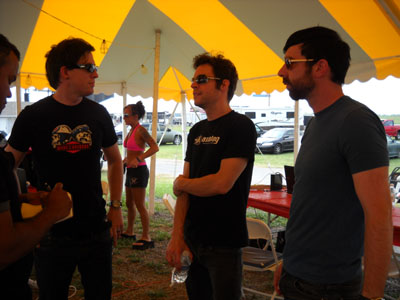 There were the campsites galore of stripper poles, swimming pools of beer, women wearing almost a bikini in the pools of course! So many campsite parties to just drive through the grounds was a show in itself! IT was a fun everywhere you looked. Positive vibes radiated ALL of ROCKLAHOMA 2010! Mark Nuessle, Rocklahoma president, did say this was the fourth and biggest year so far and they would keep it going as long as fans keep coming! They keep making upgrades and have big expansion plans! In attendance as of Saturday afternoon was 15K plus per day and that’s not including gate sales. I would guess 50K plus in people total at this awesome extravaganza of rock! 400 Acres of ……Life, Liberty and THE PURSUIT OF ROCK! I interviewed several of the above mentioned bands and some not yet mentioned that were incredibly good! I will be writing a series of articles about them. Look for them soon Along with tons of on stage (and off) pictures that you’ll have to see to believe!

Rocklahoma was a masterful mix of musicians that worked 100%. Put it on the Bucket List, you just gotta be there.