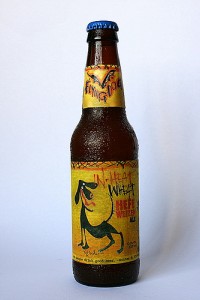 My first time experiencing this beer was a complete fluke. I had run out of beer at
a friend’s party and I was on my way to a nice buzz and didn’t want to stop. I asked
around and was given this beer that looked like you would find it being sold at a
corner store you dare not go into.

I opened it, and started to drink it with an almost regretting face. After the first
few sips I had found that not only did I like it, but that it was very well put
together. This was definitely a hefeweizen style beer that I would buy.

Its golden body and orange hints of flavor matches its delicious smell. It is
definitely a nice crisp drink that will make you want to drink more and more.

Sitting at 4.7% alcohol by volume, 131 calories at 12 oz, and 8.3g of carbs, you
really can’t beat it. Although I wish I could say this is one of the cheaper beers,
though it wont break the bank like most high price domestics and imports.

So take the chance this summer and get this lovely Ale. Fight the heat with a beer
that is in heat. Until next time, keep drinking.