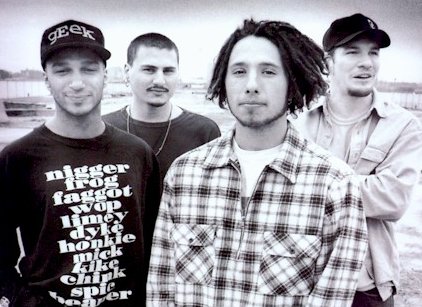 Not since their last album “Renegades” has Rage against the Machines even thought of recording a new album, until just recently. Lead singer Zach de la Rocha, after a very moving show at the Download festival. Although they have been touring since 2007, Zach de la Rocha explained that the Download festival had blown him away “in soul and spirit”. Since their official break up in 2000, shortly before their album Renegades was released, they as a band have not been in the studio all at once. Zach de la Rocha went to do some solo work, while the rest of the band joined up with Chris Cornell, from Soundgarden, to make Audioslave. In 2007 Cornell and the rest of Audioslave split up, and shortly started touring again with Zach de la Rocha as Rage against the Machines. When asked about the new album, Zach had this to say, “It’s definitely worth thinking about. We’ve got a pretty full year ahead of us and a few things to finish up on before we can make a decision, but once we get our heads clear we’ll take it from there. I wouldn’t rule it out.” I personally am in high anticipation for this album to come out, but as we know nothing is for sure in this world. So until the album does come out, my fingers will still be crossed.