(And be sure and check this out. Can you believe somone actually was there and filmed the wreckage of this plane. How incredible is that?) 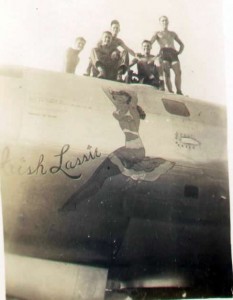 SUPERFORTRESS Irish Lassie wheels in toward the coast of Japan at 2 o’clock on the afternoon of January 27, 1945, at 29,000 feet. The air over Japan is bright and freezing. Back at her base at Saipan, in the tropics, the day is hot. Below, a winter snow lies over Tokyo’s streets.

Irish Lassie’s crew is warm; they’re flying pressurized over the target today and their oxygen masks hang down loosely to the left of their jaws. It is their eighth mission to Japan, though other B-29s from the 73rd Wing have been flying to Tokyo from Saipan for over two months.

In the blisters, in the tail, in the turrets, gunners squint anxiously through their Plexiglas, searching their arcs of sky. Someone shouts: “There they are—at 3 o’clock, high—God! About forty of ’em”

Over the coast line now, the fight begins. Forty enemy fighters pile into this first flight of twelve B-29s, from above, in front, the sides, from the tail. Central Fire Control Gunner Jim McHugh swings his upper turret, lets fly with his four fifties at the attackers from 12 o’clock. One Tojo plunges through.McHugh’s tracers riddle him, but still he doesn’t stop. At 400 miles an hour he plummets in at the Superfort and crash! In a suicide dive the Tojo rams Irish Lassie, smashing into the left wing, tearing out great hunks of the No. 1 engine nacelle and shearing off half the left aileron and flap. Her giant metal frame shudders, then recovers and heads on into her bombing run. The Tojo, spinning down out of control, blows up at 25,000 feet.

Despite the impact of the crash dive and the scores of hard-pressed fighter attacks, Bombardier Gage never budges from his sights. Delicately he twists the knobs, concentrates on the crass-hairs, whispers steadily into his throat-microphone. Deliberately his hand reaches out, closes over a toggle switch. “Bombs away! Bomb bay doors closed! Free to turn and for God’s sake turn fast!” Twelve 500-pound bombs arch and tumble on their way down to the Musashino Aircraft Engine Plant, Tokyo.

Gage jumps back to his guns, blasts the canopy off an attacking Zeke, killing the pilot. Amidships, McHugh throws his four fifties onto another Zeke, attacking from above, and shatters him. Alone and isolated in the tail sits Charlie Mulligan. He’s been having a busy time back there, fighting off the attackers. Already Mulligan has chalked up three certain kills since 2 o’clock. Now it is 2:20.
The Nips still come diving drunkenly in at Mulligan, plunging through his fire to within a few feet and then pulling wildly away. Right above him now one persistent devil flies. The Jap turns in for another attack; at 30 yards Mulligan lets fly with everything. The Jap never stops- but tears smack into the tail in a full power dive, smashing his plane to pieces on the giant fin. He almost takes Irish Lassie with him. His suicide dive tears off the entire left stabilizer, the whole left side of the tail compartment.

Up front in the pilot’s seat, Avery feels the nose drop away violently and every man in the plane feels the terrible impact of this second ramming in less than half an hour. The B-29 falls off into a screaming dive. Avery pulls back hard on the control column and kicks the rudders. Nothing happens; the plan persists in her dive. Copilot Fox is on the controls too. He thinks he’s just helping Avery out, with his extra strength, but it turns out hi is actually flying the plane alone. There is just one thin strand of cable left to the elevators and that belongs to Fox.

The B29 continues to dive for 9,000 feet. Nobody expects to get out alive. Fox, using every ounce of his strength manages to level the ship out at around 20,000 feet and it is a miracle that their meager control cable doesn’t snap.

The 20 Jap vultures now close in for the kill on the helpless cripple. But the blister gunners are still on the job. When it is all over, Irish Lassie’s total kill is 13 Jap fighters.

Off the coast, Avery lets down to 17,000 feet and depressurizes the cabin. Mulligan can’t be raised over the interphone, so Leach and Meyer make their way aft to see if he is in trouble. Mulligan is—in the worst possible trouble. Bleeding and unconscious, his head between his knees, Mulligan lies crouched in the wrecked tail section. Twisted metal, broken guns, smashed equipment and splintered glass are piled on top of him.

Working in shifts and with additional help from Gage and McHugh, Leach and Meyer extricate Mulligan and drag him inch by inch back towards the radar room. The temperature is subzero, the gale terrific, with the full draft and slip stream of the engines pounding directly in upon them.

The pilots are having their troubles. They have 1,500 miles to fly over ocean in a wrecked plane with scarcely more than a strand of cable to control it. In addition to their tail gunner being seriously wounded, their radar man, Klimczak, is badly shot up. In the radar compartments, Navigator Faubiom and Radio Operator Nellums are giving him first aid. He has been shot though the leg, back and arm, and he’s bleeding profusely. They give him morphine and plasma, strip off his clothes and sprinkle his wounds with sulfa. They feed him full rich oxygen and wrap him in blankets.

Then they go to work on Mulligan. Due to the extreme cold in the exposed tail where the unconscious gunner lies, all his clothes have frozen. His hand has been shot through and he is covered with deep gashes from the splintering glass and metal. They dress these wounds; difficult work, because the sudden warmth of the radar room causes the frozen wounds to bleed profusely. Mulligan is given two units of plasma, and all the crew except the pilots and navigator, who can’t afford to pass out, go off oxygen so the wounded men may be fed it full rich and continuously.

It is time for Engineer Watson to go through the plane and make a report on the damage. It isn’t encouraging. No repairs will be possible in the air, he says. Chances of making a successful 1,500-mile overwater flight in bad weather and in darkness are slim.

There is nothing to do but fly and hope. The black night hours drag by silently, as if they are years. The men do not talk. But Avery is glad he has kept his altitude. He needs every inch tonight. for below them the weather is bad—rough rain clouds which would throw the ship around if it got in them. And he has just that one torn cable; any extra strain might snap it. Through the night they plow on, hesitantly, counting off the slow minutes and endless miles.

Now it is time for the letdown. Somehow they have made it this far and it is only a matter of minutes from Saipan. As they descend it gets rough; nothing to fear in a sound, tight ship, but something to dread in this wrecked bomber, held in level flight by that thin strand of steel.

Every few moments Avery calls the Saipan tower: “Bluegrass! Calling Bluegrass! I have wounded aboard and am in distress . . . Request permission to make emergency straigth-in approach.” Avery hears nothing but static in his earphones. His aerial has been shot away over Japan and his is unable to pick up anything farther than ten miles from the transmitting station. But one piece of good fortune has remained with him; he has his very high-frequency transmitter intact and he is thereby able to send out his distress message.

The Superfort flies closer and closer to Saipan. Gas is low, every gauge registers empty. The pumps are sucking up the last quarts and pints that swish on the bottom of the tanks. Four hundred precious gallons of gas were lost in the first ramming.

Then the tower comes through: “This is Bluegrass. You have permission to land. You are cleared for an emergency straight-in approach. Ambulances and fire trucks are waiting.” 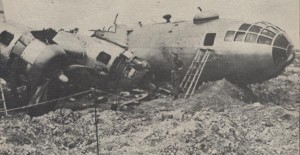 It is up to Fox. He alone has controls left. In the darkness he cuts down between two other B-29s in the traffic pattern. Approaching the field, power suddenly fails him and the seventy-ton bomber drops clear below the level of the cliffs. Fox hits the throttles full forward to maximum power and strains the last elevator cable to the breaking point as he hauls back on the control column. Miraculously he lifts the torn ship up over the cliff, then he pushes the nose down.

Irish Lassie hits the runway with dead engines. The last ounce of usable gasoline has been pumped out of the tanks. She hits, nose-wheel first, at 180 instead of the usual 100. The nose-wheel folds up, crashing through the fuselage and into the cockpit. The props chew into the coral, the ship smashes in two.
Avery’s head slams into the instrument panel; he is knocked out. Meyer, Leach, Nellums and McHugh have packed their solid bodies around the wounded men for protection and the crash landing bruises and cuts them. Fire starts in No. 1 engine. McHugh and Meyer, thinking she would burn, grab Mulligan. Still delirious, Mulligan fights furiously as they drag him stark naked from the clothing piled about him and out of the plane.

Klimczak is too sick to be moved. But help from the ground is there. They cut a hole through the fuselage, and first-aid 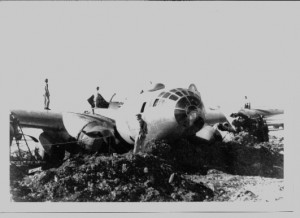 men gently load his wounded body onto a litter. From the runway, McHugh and Meyer look at the wreckage. Irish Lassie did not burn—there was too little gasoline left.

All but Mulligan and Klimczak returned to bombing Japan after a brief rest. All are alive today. Mulligan and Klimczak were hospitalized. Mulligan’s hands had to be amputated. They had frozen while he lay wounded and unconscious in the subzero tail section. Klimczak, shot in the arm, leg and back, also suffered a shattered pelvis and hip bones. And a baby was born to Mrs. Fox the night her copilot husband flew Irish Lassie back to Saipan.

Here is the cast of this terrific war drama of the substratosphere recorded at the time as an official Army Air Forces document but impounded until now for security reasons: