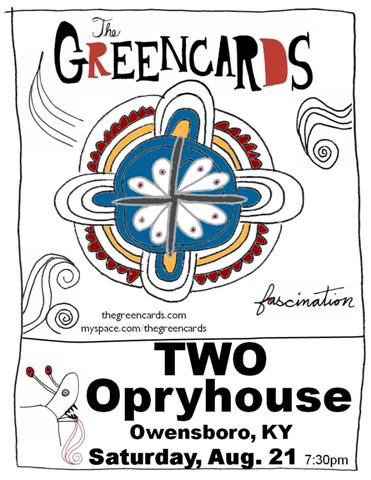 I want to invite you to a very special musical event.  I had the pleasure of seeing the Greencards at Henderson’s Bluegrass in the Park and it was one of the most enjoyable concerts I have ever attended.  I have turned dozens of friends on to this band and they never disappoint.

I have also had the recent pleasure of working with the staff and volunteers of the Theatre Workshop of Owensboro as they have grown and expanded their efforts to include leasing the Opryhouse Theatre.  No single event could better demonstrate how vital this venue and this organization is to our area than this show and the others they have booked for their 2010 Concert Series.  Please check www.theatreworkshop.org for the rest of the fabulous shows they have booked.

If you would however, like the rare opportunity to catch a couple of rising stars in an intimate, great-sounding room, this is your chance.  Seating is limited and this particular show is an absolute guaranteed hit.  Please join me and my friends one month from now on August 21st.  Let the Theatre Workshop of Owensboro and myself have the honor of introducing you to my friends, the Greencards.

Owensboro The Greencards <http://www.thegreencards.com>  will perform at the
TWO Opryhouse, 418 Frederica Street in Owensboro on Saturday, August 21st,
and we hope you can come to the show. Click here
<https://www.ticketturtle.com/index.php?ticketing=two>  for advance
ticketing information.

This  critically acclaimed Austin-formed / Nashville-based band’s love and
respect for Americana, bluegrass and country brought them together in 2003.
The Greencards have:

Originally from Australia, their urge to challenge themselves and test the
limits of any established genre has guided singer / bassist Carol Young, and
mandolin master Kym Warner (accompanied by fiddle and guitar) on their first
three albums.

The Greencards released their fourth album in April 2009. Fascination is the
band’s most daring project to date. Meticulously crafted arrangements serve
as springboards for exhilarating improvisations. While technically
breathtaking and acoustically driven, The Greencards have consistently moved
towards a sound of their own.

The Greencards appeared at several festivals in 2009 such as Austin City
Limits, Telluride, Walnut Valley (Winfield), MerleFest, Lollapalooza and the
Cayamo Cruise. They were at MerleFest again this year as well as Grey Fox.

Visit The Greencards’ CD Baby page
<http://www.cdbaby.com/Artist/TheGreencards>  to hear samples from of their
various projects. You can also join them on Facebook at
http://www.facebook.com/thegreencards