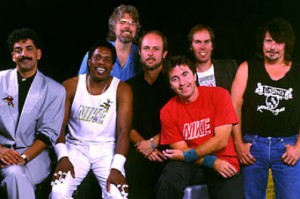 Richie Hayward, co-founder of the Little Feat, an eclectic jamband that maintained a strong cult following throughout the decades, has died. He was 64.

The drummer had been suffering from liver cancer and died Thursday at a hospital near Vancouver, Canada, after complications of pneumonia, his publicist, Bridget Nolan, confirmed Friday.

“He was waiting for a liver transplant,” said Nolan. Over the past year, benefits had been staged on Hayward’s behalf; he had no health insurance.

In a letter to fans last August, Hayward wrote about his predicament, but sounded hopeful: “My intent is to come back to the band, as soon as I am physically able. Your love and support will mean a lot to me, more than I can say. I love and will miss you all, and I will see you again on the proud highway.”

He last performed with the band on July 11.

Hayward helped form Little Feat in 1969, along with frontman Lowell George, Bill Payne and Roy Estrada. The jamband mixed a variety of genres including rock, country, jazz and blues, and were known for songs like “Willin”‘. The group fell apart in 1979 after George died, but reformed in 1987, and had been a fixture on the touring circuit.