They won’t shut you off at the board anymore…Dude, you get paid millions to play somewhere and you hold the audience and promoters hostage….You go on two  hours later than scheduled…Who are you? Axle Rose?  Not anymore….you should have cobained it years ago and then your legacy wouldn’t be so tarnished…G N R is no longer the next Rolling Stones..You killed off that band…. You are the leader of a good cover band…that’s all..Fans pay thier hard earned money and you screw them around and don’t get to play a full show because of curfews…You don’t care about the fans…Your back stage watching cartoons….(chuck) 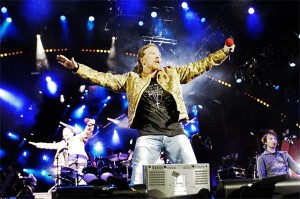 GUNS N’ ROSES singer Axl Rose has commented on the band’s appearances this past weekend at the U.K.’s Leeds and Reading festivals, the latter of which was cut short by the festival organizers due to curfew issues. In a message on Twitlonger.com, a related Twitter site where one can post messages longer than 140 characters, Rose wrote, “Don’t know what it is with us or these last two shows. Takes the fun out it for everyone — fans, band and crew alike, but whatever.

“So you know, we allegedly had a deal in place pre-show with the city at least at Leeds to do a bit longer performance that was either miscommunication, someone wasn’t informed, changed their mind, didn’t care or was a con. Regardless, the nonsense just seems so unnecessary but without real management or industry presence is unfortunately beyond our control. We hope the fans feel they got at least what they could from us under the circumstances as for us all things considered that’s the main thing. The rest is filler.

“Anyway, enough rambling. Peace, thanks for understanding and what we did manage to get done out there was a blast! The crowds and fans were amazing!! And in our opinion (not that apparently it means much) you deserved better!! Thanks again!!”

Professionally filmed video footage of the Reading performance (courtesy of the BBC) can be viewed below.

GUNS N’ ROSES reportedly started its Reading festival performance at 10:30 p.m. — more than an hour later than scheduled — and was given an extra half hour to play, until roughly midnight