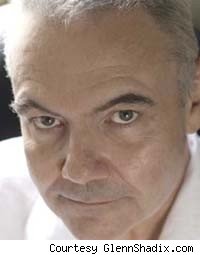 Actor Glenn Shadix, best known for his role as Otho the interior decorator in the ’80s cult favorite, ‘Beetlejuice,’ died this morning, The Birmingham News reports. The actor died following a fall at his home in Birmingham, Alabama, his sister, Susan Gagne, told the newspaper.

Gagne revealed that her brother was “having mobility problems” in recent years and had likely fallen out of his wheelchair and “hit his head in the kitchen.” She thinks the hit to the head was responsible for his death. The character actor was 58.

In addition to Beetlejuice, Shadix starred in two more Tim Burton films over the years: he was the voice of the mayor in “The Nightmare Before Christmas” and played Senator Nado in Burton’s 2001 remake of ‘Planet of the Apes.’ He also had small roles in ‘Heathers,’ ‘Demolition Man’ and ‘Multiplicity.’ Prior to retiring from Hollywood, Shadix did voiceover work for many years.
Shadix’s sister said the actor retired four years ago and returned to Birmingham to be closer to his family. He is survived by his sister, Gange, and spouse Jon Jong.
http://www.popeater.com/2010/09/07/Glenn-Shadix-beetlejuice-actor-dead/