They are playing both classic albums in their enterity! This show will be great and I bet it rocks but the Grand Illusion is Dennis DeYoung will not be performing with them and as far as I am concerned….His voice made Styx, but in the end..I will probably still go 🙂 (chuck) 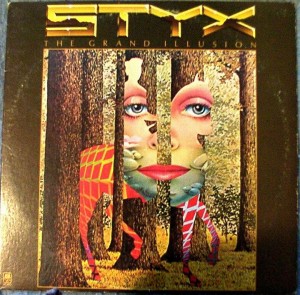 STYX is very happy to announce that for the first time ever, they will perform TWO of their classic albums live, in their entirety, in an exclusive and limited tour this Fall!  Read the press release below for details!
STYX SET TO LAUNCH “THE GRAND ILLUSION/PIECES OF EIGHT” TOUR THIS FALL, PERFORMING BOTH ALBUMS IN THEIR ENTIRETY;
SEVEN-SONG EP OF RE-RECORDED CLASSICS AND ONE BRAND NEW TRACK FOR SALE AT EVERY SHOW
August 4, 2010 — It’s the tour STYX fans have been waiting for.
STYX–Tommy Shaw (vocals, guitars), James “JY” Young (vocals, guitars), Lawrence Gowan (vocals, keyboards), Todd Sucherman (drums) and Ricky Phillips (bass), along with the occasional surprise appearance by original bassist Chuck Panozzo—are getting ready to head out on the U.S. concert trail again this year.  However, for this round of dates, the band has an extra-special treat planned – it won’t be a typical STYX show.  Along with the classic hits, the band will be performing 1977’s THE GRAND ILLUSION and 1978’s PIECES OF EIGHT in their entirety.  Both albums spawned such hit singles and Classic Rock radio standards as “Come Sail Away,” “Renegade,” “Blue Collar Man” and “Fooling Yourself (The Angry Young Man).”
And as icing on the cake, a seven-song EP, entitled REGENERATION, VOLUME 1, containing six newly re-recorded classics–“Come Sail Away,” “Crystal Ball,” “Fooling Yourself (The Angry Young Man),” “Lorelei,” “The Grand Illusion” and “Sing For The Day”—and a brand new track, “Difference In The World,” will be available for sale at every stop along “The Grand Illusion/Pieces Of Eight” October/November tour route.
“This is the most unique STYX concert ever,” says singer/guitarist Tommy Shaw.  “It’s a hybrid experience of enjoying the artistry of the vinyl album and the energy and of our live performance.  Some songs have never been performed live!”
Spawned from a suburban Chicago basement in the early ‘70s, STYX would eventually transform into the virtual arena rock prototype by the late ’70s and early ’80s, due to a fondness for big rockers and soaring power ballads.  Over the course of their 38-year career they’ve released 15 studio albums, 6 best-of compilations and 4 live albums, garnering 8 Top Ten singles. STYX has sold over 30 million albums worldwide.
On the touring front, STYX has performed more shows since ’99 than all of the previous years of its career combined.  Two Super-Bowl appearances, Pollstar box office chart-topping tours with Def Leppard, Journey, Boston, REO Speedwagon, Bad Company, Foreigner (to name a few), two more studio albums and no end in sight, STYX continues to conquer the planet, one venue at a time.
Check out the “The Grand Illusion/Pieces Of Eight” at any of the following stops:
DATE CITY VENUE
Thu 10/14 Evansville, IN The Centre (on-sale 8/13)
← Previous Post
Next Post →