Let’s see. Your a body guard for a famous hot chick… check… your single…check…she is single…check…and she drops her clothes off in front of you several times, shows you her mommy parts and you pass on it and you now want to sue her for sexual harrassment? …yep, it’s confirmed…YOU’RE GAY!!!! If not you could have told your grand kids you bagged one of the biggest stars of the early 2000’s…but instead you want in her pocket and not in her pants and she threw “it” at you….Your kids, if you have any will always question your sanity and sexuality….I mean look at the photo dude, I am not into blondes at all and she can’t sing but she’s rich and you have to work for a living so if I was in your shoes I would have done what Fred Durst did he  “HIT ME ONE MORE TIME!!!”….so…You my friend, are a dumbass and you’re GAY!!

Here’s the story from TMZ… 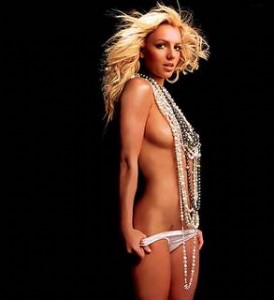 TMZ has learned … a bodyguard who claims to have been sexually harassed by Britney Spears is filing a lawsuit today, claiming Britney repeatedly exposed herself to him and abused her children.

According to the suit, a copy of which TMZ has obtained, Fernando Flores claims Britney made “repeated unwanted sexual advances” toward him by exposing herself in front of him in her home.

Flores alleges, on one occasion — in a scene right out of “Legally Blonde” — “She was wearing a white lace, see-through dress.  She walked over close by [Flores], intentionally dropped her cigarette lighter on the floor, bent over to retrieve it and thereby exposed her uncovered genitals to [Flores].”  The lawsuit goes on, “The incident caused [Flores] shock and disgust.”

The suit then goes on to describe another alleged instance where Britney summoned Flores to her room, where she was standing naked. The suit claims, “After an awkward silence during which [Britney] just stood naked before [Flores], [Flores] asked Spears if she needed anything.  After some hesitation, Spears asked [Flores] to get her two bottles of 7 Up.”

One time after allegedly exposing herself, the suit claims Britney said, “You know you liked it.”

And the suit says, “In addition to exposing herself to [Flores], Spears engaged in numerous sex acts in front of [Flores].”