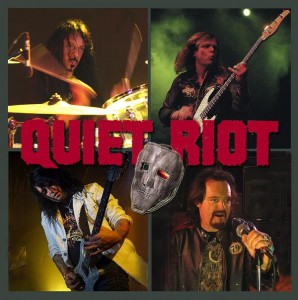 Frankie was adament about shutting down QR when Kevin Dubrow passed away but the band has got to move on and of course make tons of money… 🙂 I listened to the new recorded tracks with the new guy (see bleow) and I think I hear Kevin Dubrow in the back up vocals, sounds like instead of re-recording the songs they just lifted Kevin’s vocals and replaced it with the new guy..check it out and let us know what you think. (chuck)

After the tragic passing of co-founding QUIET RIOT singer Kevin DuBrow in 2007, many figured that the band was over. But while going through the vaults of vintage video material for an upcoming documentary of the band’s history, the spark was reignited once more for drummer Frankie Banali to kick QUIET RIOT back in gear. The easy part was filling the guitar and bass slots — as former members Chuck Wright (bass) and Alex Grossi (guitar) promptly signed on. However, having to fill DuBrow‘s large shoes was no small task.

A longtime fan of heavy metal, singer Mark Huff came to Banali‘s attention while fronting a California-based VAN HALEN tribute band (that focused on the “Sammy Hagar era”). A true Cinderella story, Huff auditioned via a cattle call audition, promptly blew Banali away, and got the gig. After getting the blessing from DuBrow‘s mother to carry on with QUIET RIOT (and to celebrate her son’s music), the group was ready to rock once more.

QUIET RIOT is currently firming up plans for a full U.S. tour — their first in three years. And with the aforementioned documentary on the horizon, and the band’s music being used in hit films (“The Wrestler”, “Tropic Thunder”), video games (“Guitar Hero Encore: Rocks The ’80s”), and even musicals (“Rock of Ages”) — as well as QUIET RIOT being name-checked in songs by WEEZER and BEN FOLDS — QUIET RIOT remains a major force in heavy metal. And soon, you will get a chance to bang your head once more to QUIET RIOT, at a concert venue near you!