Maybe there is something to this UFO stuff after all. What do you think? Opinions welcome and encouraged. (chuck)

from the American Chronicle. by Frank Warren 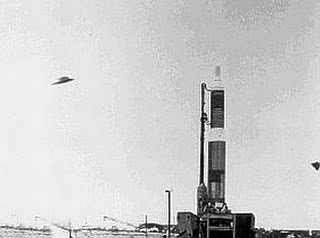 Consider it the second barrel of the double-barreled shotgun, or the “two” of the proverbial “one-two punch”; the first being Leslie Kean’s new book, UFOs: Generals, Pilots and Government Officials Go On the Record and now the upcoming press conference being co-hosted by researcher Robert Hastings and former missleer (Minuteman I launch officer – Deputy Missile Combat Crew Commander) Bob Salas.

“Declassified U.S. government documents and the testimony of more than 120 former or retired military personnel have established, beyond doubt, the reality of ongoing UFO incursions at American nuclear weapons sites. While most of the incidents apparently involved mere surveillance, in a few cases a significant number of nuclear missiles suddenly and simultaneously malfunctioned, just as USAF Security Policemen reported seeing disc-shaped craft hovering nearby.

On September 27th, during a press conference at the National Press Club in Washington D.C. , six former U.S. Air Force officers and one former enlisted man will reveal their own dramatic experiences involving UFOs at nuclear weapons sites. One of them, former Minuteman missile launch officer Robert Salas, is co-hosting the event with me. We hope to draw worldwide media attention to this vital issue by presenting the testimony of highly-credible individuals who witnessed extraordinary encounters which have officially been kept secret for decades.

Five of these veterans were rigorously screened by the Air Force and authorized to launch or otherwise work with Weapons of Mass Destruction. Of the remaining two, one headed-up a USAF communications center where he learned of UFO activity at ICBM sites; the other witnessed a UFO directing laser-like beams of light down into a major military base—including the nuclear weapons depot, according to the radio chatter he overheard.

At long last, all of these witnesses are coming forward to say that, as unbelievable as it may seem to some, UFOs have long monitored and sometimes tampered with our nukes. If ever there were a front page story, this is it.

At the press conference, Mr. Salas and I will be asking simple questions: Why do UFOs continue to appear at nuclear weapons sites, decade after decade? What might these incursions indicate about the intentions and goals of those who presumably pilot these craft? Why has the U.S. government chosen to keep the American public, and people everywhere, in the dark about these dramatic developments? Hasn´t the time come to speak the truth?

The purpose of this short article is to introduce, in alphabetical order, the individuals who will participate in the upcoming event:

Dwynne Arneson, retired USAF Lieutenant Colonel, was the Officer-in-Charge at the Malmstrom AFB, Montana, Communications Center in 1967, when he read a classified message concerning the sighting of a UFO hovering over one of the base´s Minuteman I Launch Facilities (silos), just as several missiles mysteriously malfunctioned. Although Arneson can not recall the designation of the missile “flight” mentioned, researchers now know that two UFO-related full-flight shutdowns—involving 10 missiles each—took place at Malmstrom in March of that year, at Echo and Oscar Flights.

Bruce Fenstermacher, retired USAF Captain, was a Minuteman III missile launch officer (Missile Combat Crew Commander) stationed at F.E. Warren AFB, Wyoming in 1976. His Security Alert Team reported a cigar-shaped UFO hovering low over his launch capsule, then ignored a direct order to pursue the object after it raced away and began moving from missile to missile in his flight. Fenstermacher´s squadron´s missile crews were briefed about the incident and told never to discuss it with anyone.

Charles Halt, retired USAF Colonel, was the Deputy Base Commander at a joint Anglo/American airbase, RAF Bentwaters, in 1980. Among other events, Halt observed a disc-shaped UFO directing beams of light down into the base, at one point near the nuclear Weapons Storage Area (WSA), according to several Security Policemen on duty there.

Robert Jamison, former USAF Captain, was a Minuteman I missile targeting officer (Combat Targeting Team Commander) at Malmstrom AFB in 1967. He helped re-start the stricken missiles at Oscar Flight, where Bob Salas was on alert duty at the time of the full-flight shutdown. Jamison says that his team was explicitly briefed about a UFO-connection with the incident before going into the field, thereby corroborating Salas´ report of a UFO being sighted as it hovered over the Oscar Launch Control Facility at the time of the malfunctions.

Patrick McDonough, retired U.S. Navy Intelligence Command Master Chief, was a U.S. Air Force geodetic surveyor at Malmstrom AFB in 1966. A disc-shaped UFO briefly hovered some 300-ft. above his team as they worked at a newly-constructed missile silo. They fled the scene, rolling their truck in the process. A Montana State Policeman responding to the accident told the team that some 20 UFO reports had been made that night by civilians living in the area.

Jerry Nelson, former USAF 1st Lieutenant, was an Atlas-F missile launch officer (Deputy Missile Combat Crew Commander) at Walker AFB, New Mexico in 1964. His security guards reported a UFO silently hovering over the Site 9 launch capsule on half-a-dozen occasions over the period of a month or so. The object directed a spotlight onto the missile, frightening the guards. Nelson´s reports to the base command post were seemingly ignored at the time, however, evidence has come to light suggesting that the incidents were classified Top Secret.

Bob Salas, former USAF Captain, was a Minuteman I launch officer (Deputy Missile Combat Crew Commander) at Malmstrom´s Oscar Flight, on March 24, 1967, when all of his missiles dropped-off alert status—malfunctioned—just as one of his guards reported a UFO hovering over the Launch Control Facility´s security fence gate. Salas and his missile commander, now-retired Col. Fred Meiwald, were debriefed about the incident and asked to signed non-disclosure statements by an agent from the Office of Special Investigations (OSI). Meiwald has confirmed that, shortly after the malfunctions occurred, a two-man Security Alert Team was sent out to one of the flight´s missile silos to investigate a tripped alarm there. Upon approaching the site, the team saw a second (or the same) UFO hovering near it, whereupon they became frightened and quickly returned to the Launch Control Facility.”

“To present their information in the most credible manner possible, Mr. Salas and I have asked each of the press conference participants to sign legal affidavits attesting to their experiences. Those will be posted at this website following the event..