Your daughter Carrie looked hot a hell in that Star Wars Slave outfit…:) 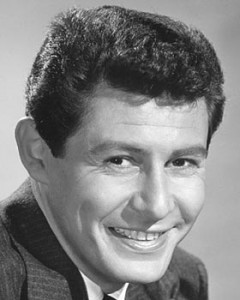 Pop singer Eddie Fisher, whose clear voice brought him a devoted following of teenage girls in the early 1950s before marriage scandals overshadowed his fame, has died at age 82.

He passed away Wednesday night at his home in Berkeley of complications from hip surgery, his daughter, Tricia Leigh Fisher of Los Angeles, told The Associated Press.

“Late last evening the world lost a true America icon,” Fisher’s family said in a statement released by publicist British Reece. “One of the greatest voices of the century passed away. He was an extraordinary talent and a true mensch.”

The death was first reported by Hollywood website deadline.com.

His fame was enhanced by his 1955 marriage to movie darling Debbie Reynolds — they were touted as “America’s favorite couple” — and the birth of two children.

Their daughter Carrie Fisher became a film star herself in the first three “Star Wars” films as Princess Leia, and later as a best-selling author of “Postcards From the Edge” and other books.

Carrie Fisher spent most of 2008 on the road with her autobiographical show “Wishful Drinking.” In an interview with The Associated Press, she told of singing with her father on stage in San Jose. Eddie Fisher was by then in a wheelchair and living in San Francisco.

The Fisher-Taylor marriage lasted only five years. She fell in love with co-star Richard Burton during the Rome filming of “Cleopatra,” divorced Fisher and married Burton in one of the great entertainment world scandals of the 20th century.

Fisher’s career never recovered from the notoriety. He married actress Connie Stevens, and they had two daughters. Another divorce followed. He married twice more.