Well, I got to give you props here Elton, you just told it like it is…Most of the performers on “AI” will never be heard from again in a few years except for maybe when they crash and burn….(chuck) 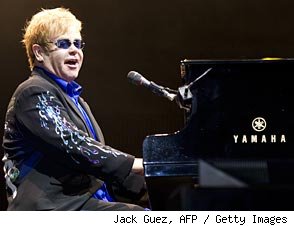 Elton John’s career has spanned decades, but he insists the longevity is because he played his dues and worked his way to the top — unlike one-hit wonders found on ‘American Idol’ or ‘X-Factor.’ John, 63, believes fame will be fleeting for these reality show winners and contestants.

“I’m not a fan of talent shows. I probably wouldn’t have lasted if I’d gone on one. I was asked to judge ‘American Idol.’ I couldn’t do it because I won’t slag anyone off,” he told UK’s Daily Mail.

“There have been some good acts, but the only way to sustain a career is to pay your dues in small, sh*t clubs.”
“I don’t want to be on television. It’s become boring, paralyzingly brain crippling. I like Simon Cowell, but what he does is TV entertainment,” John added.

John goes on to explain that the industry only has a handful of talented artists, and the reality TV singers don’t really have a chance to come close to their greatness.

“Lily Allen is incredibly talented and can do anything she wants – act, sing, write. I’m also a huge fan of Lady Gaga. And I adore Amy Winehouse” he said.

“It’s important they write their own songs, so they’re not at the mercy of anyone. Songwriters today are pretty awful, which is why everything sounds the same. Contemporary pop isn’t very inspiring.”