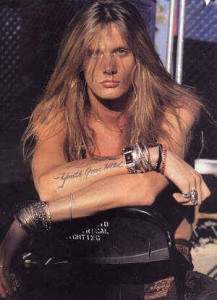 Riley’s Olde Towne Pub owner Jim Kakouros told The Peterborough Examiner trouble started when Bach and a few of his friends approached the pub’s musician of the evening, Josh Gontier, and asked if they could sing.

After being told to talk to management, Bach chose to sit back down and began heckling and cursing Gontier, Kakouros said, and Bach began throwing ice cubes at him, asking if he knew who he was.

At that point staff stepped in and asked Bach to stop.

Bach was eventually asked to leave, Kakouros said, but was allowed to stay and finish his glass of wine.

Read the entire report from The Peterborough Examiner.

Check out the video footage at TMZ.com.

A Chex Television report on Bach‘s arrest can be viewed below.