as was denied by the band….I had always heard he had a bad case of “LSD” when he was in the band..(Lead Singer’s Disease”..chuck 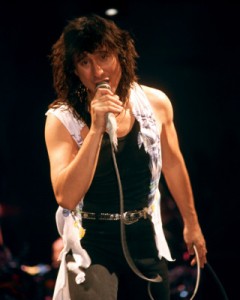 Former Journey frontman Steve Perry has stunned his former band mates by asking to rejoin the group in the wake of the rockers’ recent chart revival.

Perry left the band for good in 1998 to embark on a solo career and Filipino singer Arnel Pineda took over vocal duties in 2007. They have since enjoyed renewed success after their power ballad Don’t Stop Believin’ was covered by the cast of hit TV musical Glee.

The guitarist tells Britain’s Daily Star, “He seems to be enjoying the spotlight a little too much. The fact is he’s no longer the lead singer. He walked out.”