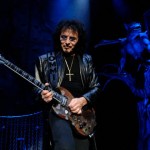 ‘Paranoid’ is arguably your most famous guitar riff. Legend tells it that the song was a very late addition to the album?

“In those days, you didn’t have tape recorders. You had to play riffs, keep playing them and remember them. We were recording the album [‘Paranoid’, 1970] and the label suddenly said, ‘You don’t have enough songs!’ We didn’t know what to do and they asked us to come up with another song. Within a few minutes I came up with the riff to ‘Paranoid’, played it to the other guys and they liked it, so off we went. That’s how simple ‘Paranoid’ was – we wrote and recorded it in a day.”

“Yes it did. We really didn’t want a hit single with ‘Paranoid’ because in them days, to have a hit single was selling out. We didn’t want a hit single and we didn’t expect it to be a single. We just did it as a filler track. Most of the tracks on the album were quite long and a lot of people probably wouldn’t have played them because they were too long, so ‘Paranoid’ was an ideal track to release, being short and up-tempo. It just took off. We were as shocked as anybody when that got in the charts. We thought, ‘Bloody hell, there’s all this stuff here we’re trying to do musically and then something as simple as ‘Paranoid’ gets in the charts and everybody remembers it!'”