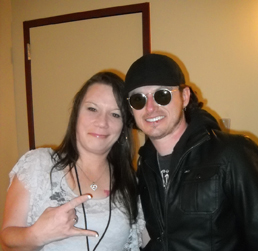 The 2011 concert season is in full swing already. Even with most of the country snowed in the past few weeks there are many bands on tour. The best place to see if your favorite band is coming to a town or city near you is to check their website and/or social networking sites such as Myspace music or Facebook.

Tonight,  Kick Acts will be rocking to Hinder, Saving Abel, My Darkest Days and Kopek at the Osage Event Center (http://www.milliondollarelm.com/event-center) Tulsa, OK.  A tentative interview is in the works with one of these awesome rockers (it’s a surprise) stay tuned here for the show review and individual band stories to come! It promises to be a night of kick ass fun!

I am going to list a few of the bands on tour currently and in the near future. Get to a LIVE show soon, you will be glad you did! Linkin Park, Ozzy Osbourne (who played here in Tulsa OK this month also) SLASH, The Avalanche Tour featuring Stone Sour, Art of Dying, Halestorm, Theory of a Deadman and Skillet. Other bands on tour or have upcoming tours include but are not limited to Korn, Whitesnake, Rise Against, RUSH, Bob Segar, Kid Rock, U2 and the list goes on and on! So it is a great year for the concert go-er its a great year to get out and ROCK OUT!

Also the ROCKLAHOMA 2011 line-up has been announced with more bands to come and let me just say WOW! Motley Crue is headlining along with many other great groups! Check it out! www.rocklahoma.com. Pre-sale tickets can be bought now. Time for Turbo’s Twisted Metal to go KICK ACTS in 2011 !