I can’t wait for this one! Hopefully Steven is back too!! chuck 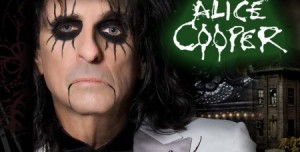 has completed work on his new album, “Welcome 2 My Nightmare”. Cooper made the revelation during his “Nights With Alice Cooper” syndicated radio show, saying that “‘Welcome 2 My Nightmare’ is done. It’s just sitting there.” Like the 1975 original “Welcome To My Nightmare” LP, was produced by Bob Ezrin, who also worked on the singer’s “Billion Dollar Babies”, “School’s Out” and “Love It to Death” releases.

“We thought the story was good, but we started talking about ‘Welcome To My Nightmare’, which I think is our biggest triumph,” Cooper told Billboard.com last October. “He mentioned, ‘What if Alice had another nightmare?’ And we wrote three songs right there. He got really involved in it. Bob is even darker than I am.”

Cooper told Billboard.com that he and Ezrin were working on at least 13 songs, including the ballads

“I Am Made of You” and “Something to Remember Me By”. In addition, Cooper recorded three new songs with original bandmates Dennis Dunaway (bass), Neal Smith (drums) and Michael Bruce (guitar).