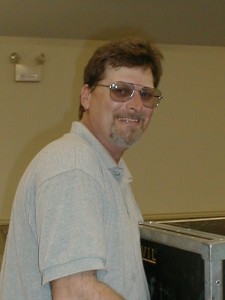 Terry “TC” Chambliss was Holy Cross’s sound man and road manager but more importantly a good friend to all of us.

I first met him back in 1999 when I was asked to join the band. He used to joke when we were all loading the band trailer that he would start putting the gear on the back wall and play Tetris the rest of the way out with it. When he would take a smoke break my son Josh and Terry would head outside and it was a running gag that Josh was out there secretly smoking with TC 🙂 Terry also turned out to be my driving buddy alot. We both liked to drive at night and we would sit up front in the van and listen to campy old radio stations and talked as we crossed over the many miles of highway as the rest of the guys in the band slept. He loved the Lord and had a servants heart. I don’t think I ever saw him upset. Another one of my many memories of him was that his road breakfast was a cup of coffee and a cigarette. I enjoyed my time with him and will miss him. I know he is healthly and whole and in Heaven now. Rest in peace my friend.