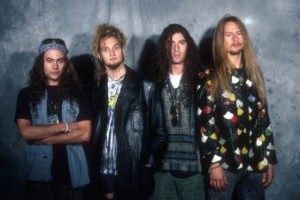 The members of ALICE IN CHAINS have released the following statement regarding the passing of the band’s former bassist, Mike Starr:

“Jerry [Cantrell, guitar]and Sean [Kinney, drums] are mourning the loss of their friend and ask that the media respect their privacy — and the privacy of the Starr family — during this difficult time. Their thoughts and prayers are with the Starr family.”

Starr was found dead in a house in Salt Lake City, Utah on Tuesday afternoon (March 8), according to TMZ.com. Starr, who was a founding member of the group and played on its first two albums, was 44 years old. Police who were called to the scene said that foul play was not suspected, but that drugs were found near the body. Starr‘s father told TMZ.com, “It’s a terrible shock and tragedy.”

According to The Pulse Of Radio, Starr had struggled with drug problems for years and was dismissed from ALICE IN CHAINS in 1993 due to his addiction. He had been arrested numerous times over the years for DUI, reckless driving, and various drug charges in Los Angeles, Seattle and Salt Lake City. Just last month he was arrested for felony possession of a controlled substance in the latter city.

Starr was featured as a cast member of the third season of the VH1 reality series “Celebrity Rehab With Dr. Drew” in 2009. Hosted by Dr. Drew Pinsky, the season consisted of eight episodes that followed the real-life experiences of celebrity patients undergoing detoxification and treatment at the Pasadena Recovery Center. However, like fellow rocker participant Steven Adler of GUNS N’ ROSES fame, Starr seemed to struggle once his season on the show was finished.

The members of ALICE IN CHAINS had been vocal about their distaste for “Celebrity Rehab” during Starr‘s tenure on the show. Guitarist Jerry Cantrell called it at the time a “real travesty,” while drummer Sean Kinney also blasted it. “It exploits people at their lowest point, when they’re not in their right mind, and the sad part is, this is like entertainment for people when it’s actually a life and death situation,” he said. “I don’t think it helps anybody and it makes entertainment out of people’s possible death, and that’s pathetic and it’s stupid. So I don’t support that show at all and I think it’s pretty disgusting.”

Following the news of Starr‘s death, Pinsky tweeted, “Devastating to hear of Mike Starr succumbing to his illness. So very sad. Our prayers are with his family.”

Starr was ALICE IN CHAINS‘ first bassist and played with the band from 1987 to 1993. He appeared on the band’s first two albums, “Facelift” and “Dirt”, but left in the middle of the “Dirt” tour and was replaced by current bassist Mike Inez.

ALICE IN CHAINS vocalist Layne Staley died in 2002 after a long struggle with drug addiction that halted the band’s career for years, until they returned in 2009 with new singer William DuVall and new album “Black Gives Way To Blue”.