I have seen AC/DC several times going all the way back to the Highway to Hell tour with Bon Scott in 1979. They opend for Molly Hacthett, can you believe that? After AC/DC, Molly Hatchett just stood on stage and alot of the crowd left the Coliseum. Thier asses were clearly kicked that night.

So here we are 30 plus years later and AC/DC is still kicking ass! I just recently caught the “Black Ice” tour and these guys can still dish it out. They put the young bands of today to shame. Todays bands all sound and look the same. There is only one AC/DC. Enjoy the article from CDN. 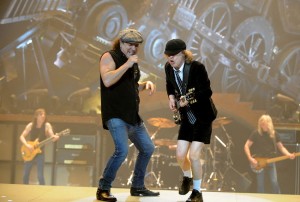 South American audiences are known for being insane, and the one on the DVD certainly fills the bill. Does crowd response still mean anything after all these years?

JOHNSON: It certainly does. It gives me goose bumps some nights. You’ve really got to concentrate on what you’re doing, because if you start looking at the crowd, you forget what you’re doing.

YOUNG: Some shows, you can feel a buzz before you even come out. It’s almost like you don’t have to be there. They’re already having fun. And you can’t hype an audience. It never works.

JOHNSON: I actually think if you talk to an audience too much, you start to sound like a politician or a union boss. Just shut the f— up and start playing.

Why not just put (rhythm guitarist Malcolm Young and bassist Cliff Williams’) microphones at the back of the stage where they stand so they don’t have to walk 10 steps forward and 10 steps back all night long?

JOHNSON: What! You must be joking! We’d be lost! We’d be confused!

YOUNG: I remember Mick Jagger asked me once: ‘Do you think Malcolm would come forward and play?’ I said: ‘Those steps are ingrained in him. That’s his dance move. That’s it.’

Plus, it’s his only exercise of the night.

check out the rest of this great article here!!