Tuesday night in Tulsa OK, the Downtown BOK Center all but exploded with the energy of the Foo Fighters kickoff of their US Tour. This band appeared, sounded, and performed at the top of their game. Sixteen years of Foo Fighters and just when you think it can’t get better live …it did. After a two year hiatus to work on individual projects and record, it appeared they never missed a beat. As a matter of fact, they stepped it right up. 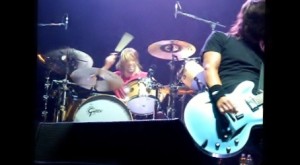 The show opened with the song Bridge Burning, only to slither into a musical frenzy to Rope and then roll with the intensity never stopping into The Pretender. Dave Grohl took each concert go-er right along with him through each song, kicking, screaming and head banging straight up Rock Proud. Not a single arm in the arena was not raised. I was also impressed with the light show. It was very dynamic and entertaining, if you could look past Dave Grohls perfect blue guitar, although that was hard to do. Also, Taylor Hawkins, who I could’ve watched and never looked away, with his heart pounding affair between his drum set and himself was music erotica, intense. The rest of the guys we call ” Foo Fighters” have managed to thrill us all once again, each member really putting it all on the line live.

If you can get a ticket for this tour, you won’t be disappointed. Foo Fighters deliver concert fans every dimes worth here in Tulsa, OK. Playing for over two hours and encore you ask? Eight of them. Twenty eight songs total. One track being “Shake Your Blood” with Lemmy Kilmister, who Dave Grohl called one of his Icons. Motorhead opened the show and rocked the BOK Center with undimished power all in their own right. WOW! Awesome! The crowd swooned as they got more Foo, as did I (have to admit). It is rare I would be at a loss for words to describe a rock concert but I have to admit, Foo Fighters have got …The Best of Me!